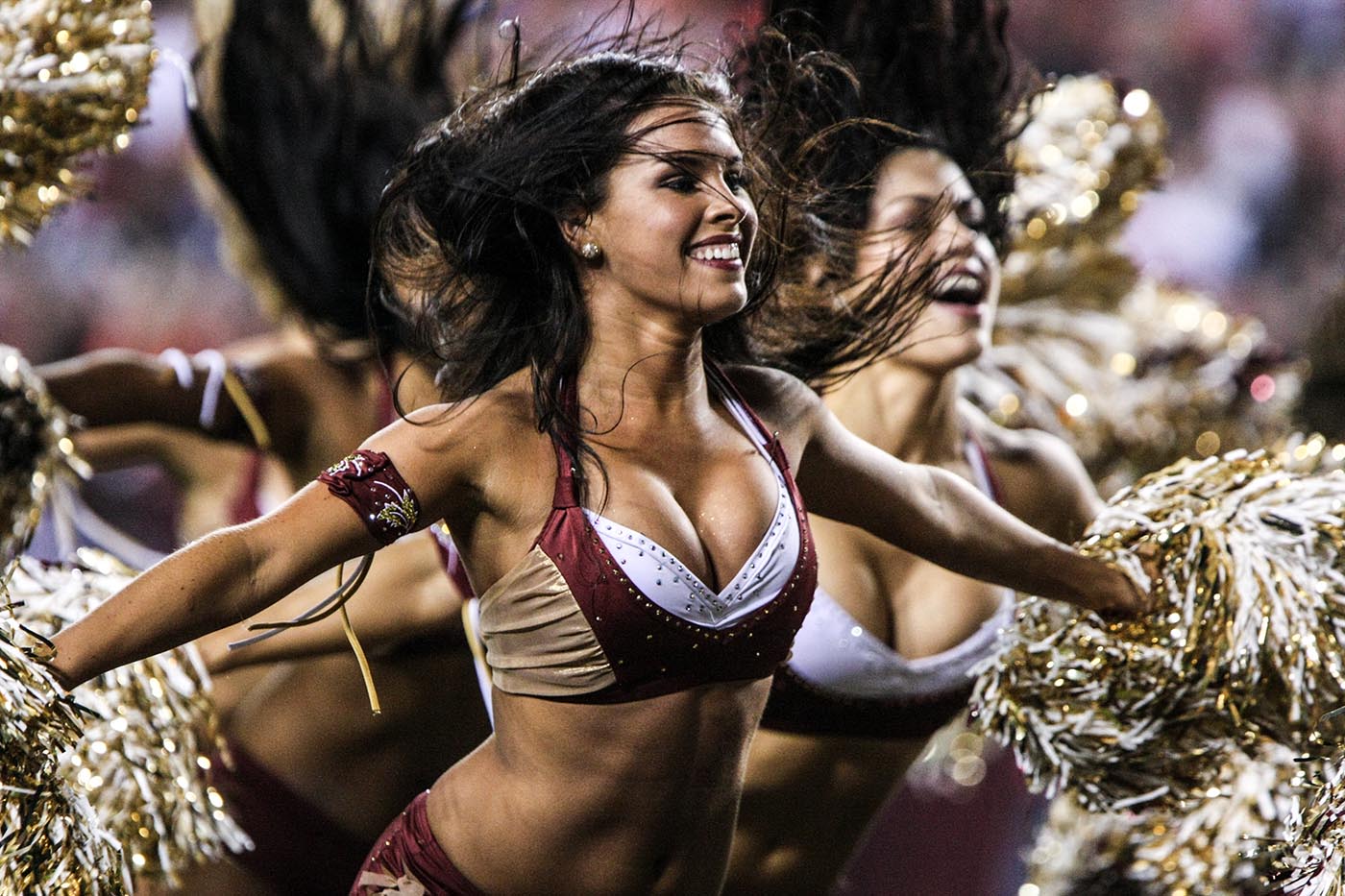 There are dozens of special types of cheerleading if you include all its niches and subcategories. If you’re looking for a more detailed list, you can check that out on Wikipedia. For the sake of keeping it simple, I’ll only touch on the most relevant ones for our purpose, and I’ll summarize some similar types into a single category.

The name of this category is very misleading, as most cheerleaders (including myself) do not consider this “real cheerleading “. Professional, for that matter, only means they are doing it “as a profession/job”, meaning that one can earn money doing it (although it’s less than minimum wage in the US). These are the young women you see dancing at the sidelines of NFL games and posing in swimwear calendars.

Other types of cheerleading, such as All Star and school cheer, work towards distancing themselves from professional cheerleaders. Not only because those teams mainly consist of dancers who don’t perform high-level stunts and tumbling, but because of the fundamentally different values they project. For professional cheer, a perfect body and pretty face are prerequisites and might well be the reason for someone not making the team. After all, the predominantly male fans at football or basketball games hardly judge these provocatively dressed women by their dance skills.

This selection criterion does not exist in any other kind of cheer, where cheerleaders are assessed by their skill and athleticism. Also, many All Star cheerleaders around the globe are underage, and we don’t want them to be portrayed in a sexual way.

Popular professional teams include the Dallas Cowboys Cheerleaders, Miami Dolphins Cheerleaders or Houston Texans Cheerleaders. Don’t get me wrong, I don’t see anything wrong with young women deciding to follow their dream and perform dance routines in front of packed stadiums – this is awesome, and they work hard every day to maintain their skills and fitness. They also usually do a lot of representation, modeling and charity work, so props for that!

It’s just not the type of cheerleading we want to be associated with, and it’s not what we do in Switzerland. Making a one-on-one comparison between professional cheerleading and school or All Star cheer would be like comparing ballet to figure skating; sure, there are similarities and shared techniques, but they are undeniably two different sports.

Although it might sound similar, this is absolutely not to be confused with professional cheerleading. Performance Cheer is a part of the official cheerleading world championship and does not include being on the sidelines for a specific sports team, although many performance cheer teams will present routines at events they were hired for.

Performance Cheer includes many different styles of dance, such as jazz, hip-hop, ballet, modern and the cheerleading-specific pom dance. They also combine cheer-style jumps, dance jumps, turns and acrobatic elements to give the sport a distinct look and feel. Team sizes vary from only 2 athletes (“Double Dance”) to a whole squad of up to 24. I am no expert on this category as I’ve never actively engaged in it, but I’m sure the Eurodancers from Zurich will gladly provide you with more information. They’re the top-dogs in this category in Switzerland and have won many international titles as well.

This category is very diverse, but I’ll condense it as much as I can. School cheer is a mixture of representing your school at games/pep rallies and the athletic side of things, which goes into the direction of All Star cheer. Middle- and high schools will perform stunts and tosses at a level that is appropriate and safe for their age group. They also do cheers and chants to animate the crowd at football or basketball games, and often perform halftime shows. Many schools also compete in dedicated cheerleading-only championships.

College and university cheer takes this to the next level. These athletes are also found on the sidelines, but their training is much more focused on a very active competition scene. Most college teams are Coed, so you’ll find a lot of men competing there as well. Stunts and pyramids are on the highest level of legality (level 6) and usually very spectacular to watch. Most participants have a background in All Star cheer and are already top-level athletes when they join their college team.

The easiest way to spot school teams: Their uniforms. School uniforms represent the school colors and often display initials or the school logo. They are never cropped, so the athletes’ bellies aren’t showing (contrary to most All Star teams).

Here it is, the moment of truth – the (for unknown reasons) least famous, yet unbelievably exciting All Star Cheerleading. Glitz and glam galore: the All Stars are easily spotted by their sparkly uniforms. But don’t let that deceive you. This is merely packaging for some of the best and toughest athletes you’ve ever seen.

The All Stars perform high-level stunts, pyramids and tumbling at a remarkable pace. There’s no poms and chanting here, as All Stars don’t engage in any kind of sideline cheering. Gyms are completely independent and their eyes are set on only one goal: winning cheerleading championships. For this, many athletes train up to 6 times a week, working on their individual skills and their team’s routine. Ages range from 4 years old up to around 18 – this is when the All Stars age out of the most popular categories of their sport and either retire, join a college team or continue their All Star quest in one of the open-age divisions.

Want to catch a glimpse into an All Star practice? Check out Cheer Extreme, or watch an episode of the AwesomnessTV Youtube series “Cheerleaders“!

That was a lot.

I know. But now that you’ve got all the possible types of cheerleading figured out, we’re ready to dive into the Swiss cheer scene in next week’s post!