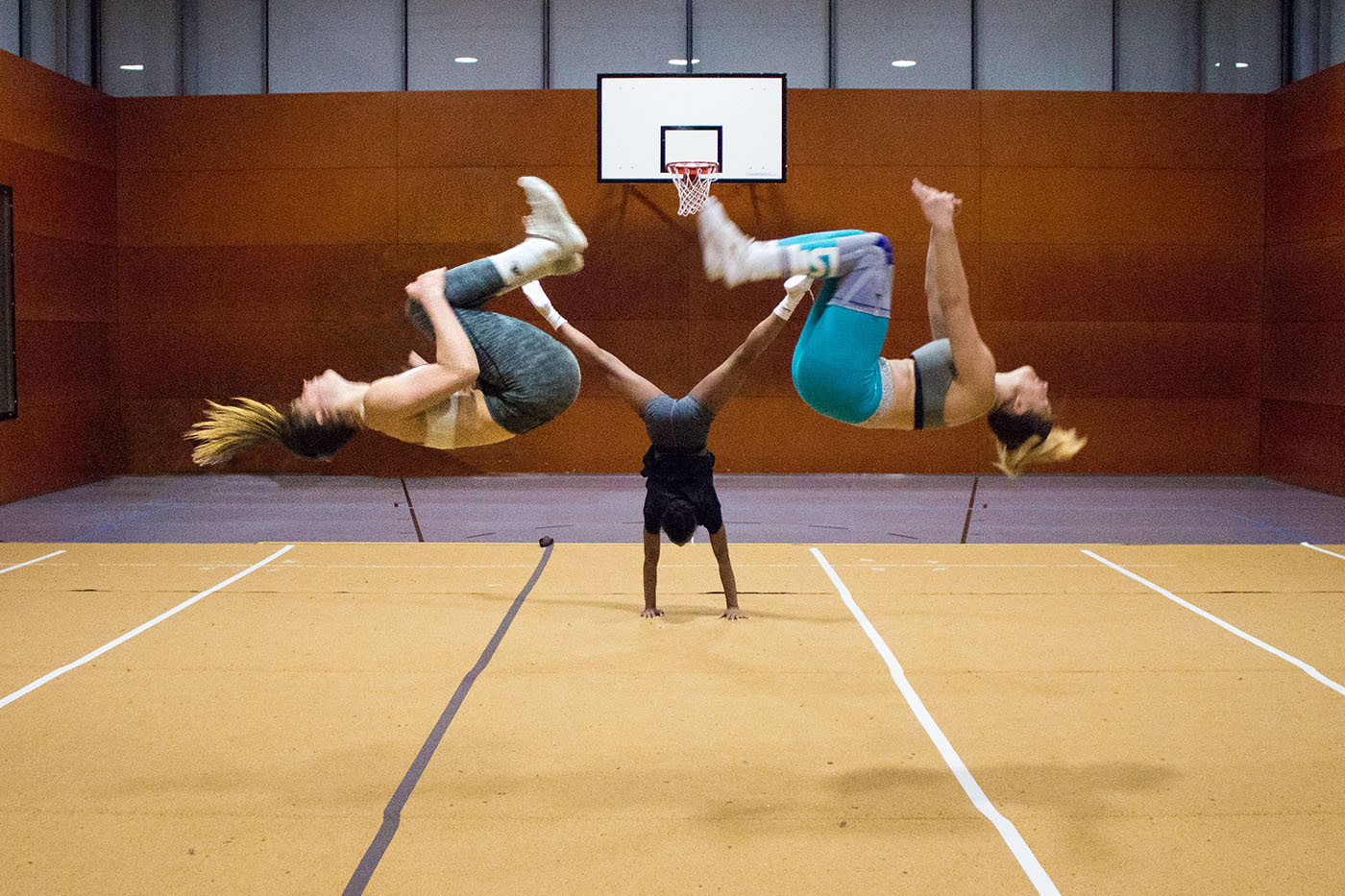 Yes, backflips are a thing we do. No, not every cheerleader in Switzerland can do one. In fact, I’d say there’s no more than 3 standing back tucks (the thing in the title image) per team on average. That trick is hard.

Today, we’re looking at some of the components of a cheerleading routine. I’d like to thank everyone who sent in pictures, I received some great ones that I’ll be using in future posts!

That flipping part of the routine

We call it tumbling. It involves floor exercises on various levels of difficulty, ranging from forward rolls to – you guessed it – backflips. The hardest skill I’ve seen so far at Swiss Championships is a full twisting layout. In other countries, mainly the US, tumbling has a much higher significance, which is why you’ll see much harder tricks there. This has to do with their scoring system, as they receive more points for difficult tumbling than we do.

The skills are split into standing tumbling and running tumbling. “Standing” means that you start in a standing position (duh) without any prior forward movement. So if you start out by running backwards across half the mat and then do a backward roll, you’re still doing standing tumbling!

Running tumbling is defined by some kind of forward momentum that starts before you do a skill. Usually, this means that you start running forward, then do a round-off to change direction, then add your skills (like back handsprings or the like). Here’s a junior athlete from Wildcats performing a round-off, back handspring, back tuck:

There’s no need to worry if you can’t do any tumbling before you start out. You can learn everything you need from your coaches. If you’ve never done it before, you’ll most likely start with rolls, then move on to handstands and cartwheels, and when you’re ready you’ll eventually move on to round-offs and handsprings. To advance in tumbling, you need high control of your body and good physical fitness so you’re able to push off fast and gain speed and height.

That hopping part of the routine

Our jumps are closely tied to standing tumbling. They’re even scored together. There isn’t a huge variety in our jumps; most teams do Toe-Touches, and you see the occasional Pike or Hurdler. Jumping requires great power for good height, but also a lot of core strength and flexibility to pull off the moves.

In order to upgrade the jump score, teams usually connect several jumps and add a tumbling element, such as a back handspring or back tuck at the end. Most teams in Switzerland however don’t have a full squad of 20 people who can pull that off, so the focus is on clean, high jumps with the occasional tumbling highlight at the end.

That dancey part of the routine

Dancing is a very small part of a cheerleading routine that’s usually added at the end. It evolved a lot over the last decades. At the beginning, there were fixed “motions” to go through. We still use those, especially for sideline cheerleading, but not as much in dance anymore. Today’s dancing is more about energy, synchronicity and expression than about hitting certain arm movements perfectly.

Elements can be taken from all kinds of dance styles. They are adapted into the high-energy, fast pace style that is seen throughout the whole routine. You have to give everything you have into these last few seconds on the mat; after all, a dance is usually only 4 eight-counts long.

Coed teams do not dance at all in Switzerland. They use that time for a longer pyramid or another stunt.

The weird things in between

You will often see cheerleaders pull faces at the crowd or celebrate the tumbling pass that they just landed. This isn’t because they usually fail that pass and are excited to have landed on their feet at all. It’s just part of the sport, and it is part of the score we receive from the judges. Cheerleading is supposed to look easy. Athletes are expected to pull the hardest tricks with a smile on their lips and a wink at the judges. We’re performers, after all, and we love showing off what we worked for.

What did I forget…

You might have realised that this list isn’t complete yet. Stay tuned for next week’s post, where we will discuss another major part of cheerleading routines: Stunts, Baskets and Pyramids!