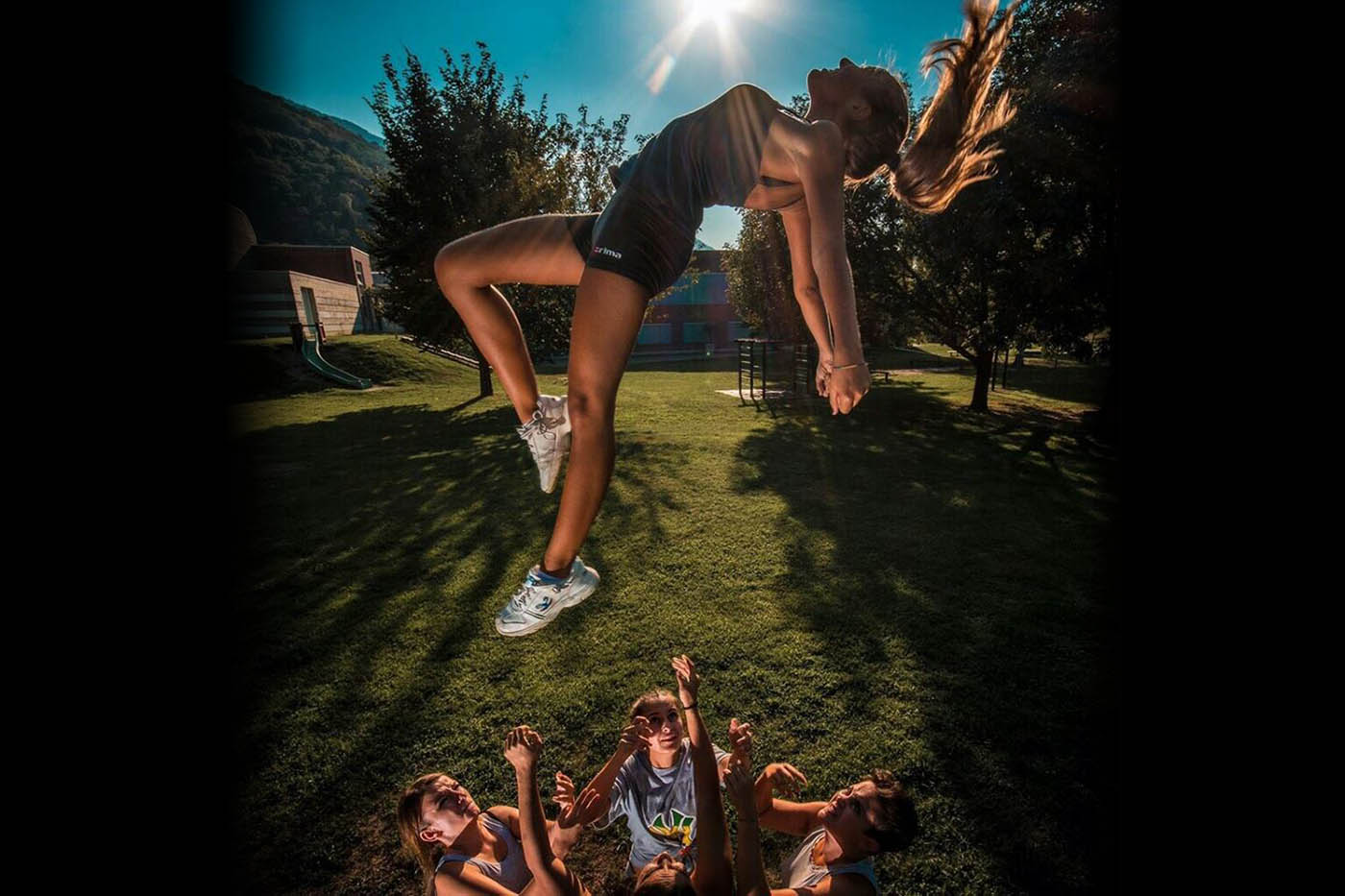 Last week, we learned about tumbling, jumps and dance. Today, we’re taking a closer look at stunts, baskets and pyramids!

How to lift people

There’s some different ways to stunt. Which one is most suitable depends on the division of a team (coed or all-girl) and the skill level of the athletes within it. In general, there’s a maximum of five athletes who make up one stunt group. A complete team is usually made up from 3-6 stunt groups.

The top person who’s lifted up is called “flyer” or just “top”. Flyers are expected to not only be physically fit just like the rest of the team, but also have extraordinary flexibility.

The two athletes directly underneath the flyer are called “bases”. The “main base” is under the flyer’s right foot, the “side base” or “second base” is under the left foot. In single-legged stunts, they both hold on to one foot. They carry the main weight of the flyer and need to be physically fit enough to push, hold and catch consistently and precisely.

Behind the flyer, there’s the so-called “back spot”. She/he holds on to the ankles of the flyer and stabilises the stunt, thus supporting both the flyer and the bases. Back spots are generally taller than bases, as they need to be able to reach high and control the stunts in the air. In addition to strength and speed, they need great reflexes to be able to catch and balance reliably.

The “front spot” is an optional addition to a stunt group. They are usually not seen on higher-level teams, but they can help bases who aren’t strong enough yet by grabbing onto their wrists and taking away some of the weight of the flyer. Many youth teams work with front spots, as it’s safer and more comfortable for children. That way, they can learn good technique without worrying about strength. 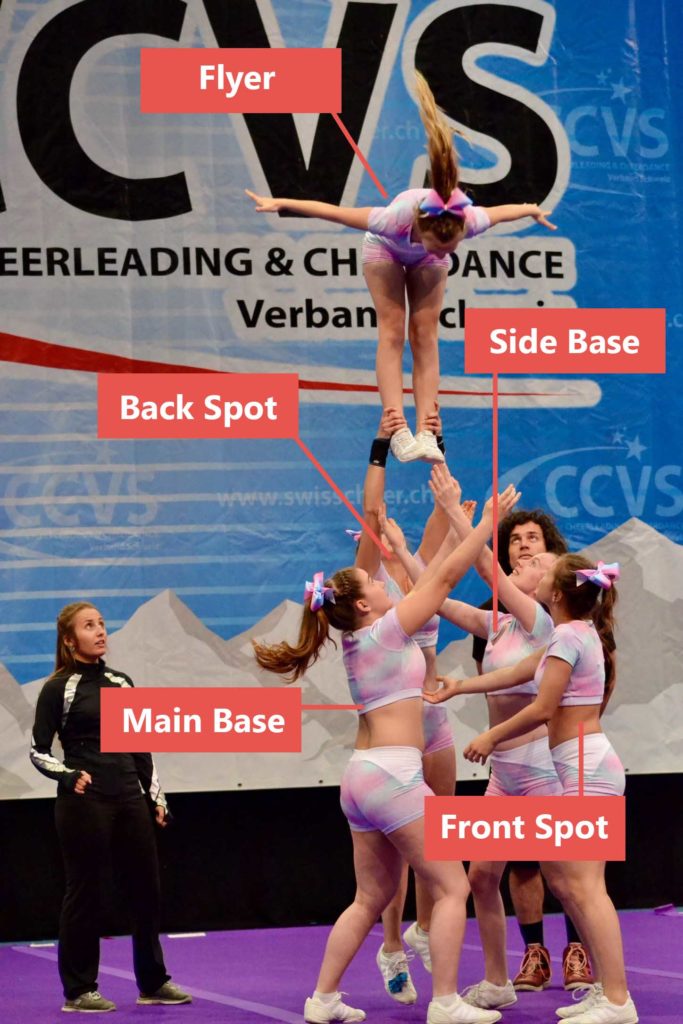 High-level teams can modify the traditional stunt group to make stunts more difficult, for example by taking away the back spot. Coed teams are expected to incorporate single-based partner stunts into their routines, meaning there’s only one base and a flyer on top.

What makes a good stunt?

Generally, there’s three components in a stunt. You gotta get up there, you gotta do something cool, you gotta come back down. Or, in our terms: Mounts, transitions and dismounts.

To add variation and difficulty to stunts, teams add in twists or release moves, or even both at the same time. Broadly speaking: The more twisting, flipping and free-flying you see, the harder the stunt is.

Baskets (or tosses / basket tosses) are done with a stunt group as well, but there’s one major difference to a normal stunt: The flyer is pushed into the air by the bases and back spot, does a trick in the air and comes straight back down. Contrary to that, stunts are held above the bases’ heads for at least a short moment and are always under their direct control.

The amount of tricks allowed in a basket toss is limited by the level a team performs in. A youth team on level 3 is allowed only one move and no twists, whereas a senior level 5 team can do several moves and twists. Only senior level 6 teams are allowed to flip around the horizontal axis in the air.

Uhm… I thought everything you do is called a pyramid?

Yes, when I talk to “outsiders” (=mere mortals) I also refer to all stunts as pyramids. It’s just easier to understand. But there is a difference.

A pyramid is considered a pyramid as soon as several stunt groups connect. The flyers need to at least touch each other for it to count. The cool thing about pyramids: many tricks that are forbidden in the stunt-section are allowed in pyramids! On level 4, for example, flyers are not allowed to flip freely in a stunt. When they are in a pyramid however, they can do a flip if two other flyers hold on to them and guide them.

On level 6, it’s even allowed to put one flyer on top of another flyer, which can get pretty spectacular! No matter the level, all pyramids require great team coordination and trust in each and every athlete involved. A whole pyramid can crumble if one of the 25 athletes involved misses a beat.

Now that you know all the components of a cheerleading routine, you’re set for competition season! Stay tuned for a special post this week – I still have some explaining to do before the Spirit Fever Open competition on Saturday!