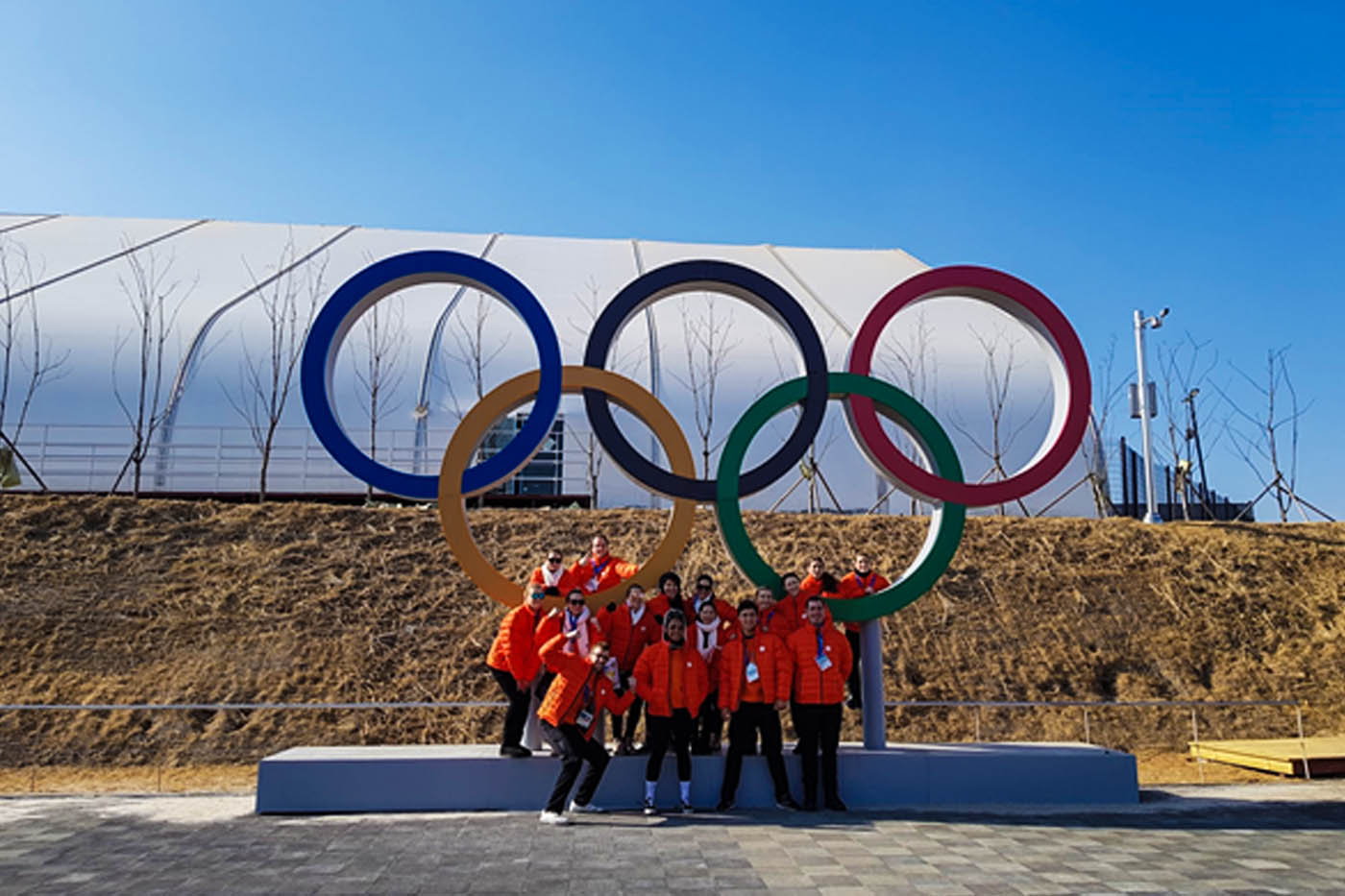 December 6th, 2016 marks a milestone in cheerleading history: The International Olympic Committee (IOC) grants provisional olympic recognition for our sport. For three years, they provide the International Cheer Union (ICU) with funding and help developing the sport. After that, it might be fully recognised as a part of the summer olympics.

In February 2018, our Coed National Team got the chance of a lifetime: They received an invitation to the Winter Olympics in Pyeongchang. Florence, head coach of the team, tells us how this came about and what happened in South Korea.

Flo, Switzerland isn’t widely known as a cheerleading nation. How did this happen?

When we arrived in Lausanne, the president and his right hand explained their project to us. They wanted to invite cheerleading teams from seven different countries to make appearances at the Winter Olympics to build awareness for the sport.

We were thrilled, of course – but also a little confused. Why Switzerland? Many other European countries are more advanced and have a more developed cheerleading scene. We didn’t want to go to Korea just to be sent home when they realised that we’re not as good as our American friends He told us that they wanted the countries who have a strong presence in the Winter Olympics to have their cheer teams there, which is why Switzerland was chosen.

How did you chose the athletes who would go to Pyeongchang?

Our first thought was to promote the Allgirl National Team, which is the team that had an official tryout and is organized with support of our association. The KCA, however, asked for a coed team. Also, there were only 4 months to prepare, and the Allgirl National Team was already stretched thin. Each athlete has to take two weeks of holidays to go to Florida in April, so most could not have afforded to take off two more weeks in February on such short notice. Additionally, some of their most important trainings are around February-March, and they needed to focus all their strength on worlds.

So we looked for a coed team. The obvious choice would have been the winner of last year’s Swiss Championships, the Capital Hornets. They have an Allgirl team now, so that wouldn’t work, which is why we gave the chance to Eclipse from Lausanne Angels. They placed second last year, and almost all athletes were able to arrange the trip with their employers.

The level of the team wasn’t off-the-charts-crazy at that time, but contrary to the Allgirl National Team we could train together at least twice a week as we’re all in the same club anyways. Our goal was to show a very solid and clean level 5 routine. Our team is used to level 6, so there was a lot to learn, but they did great. 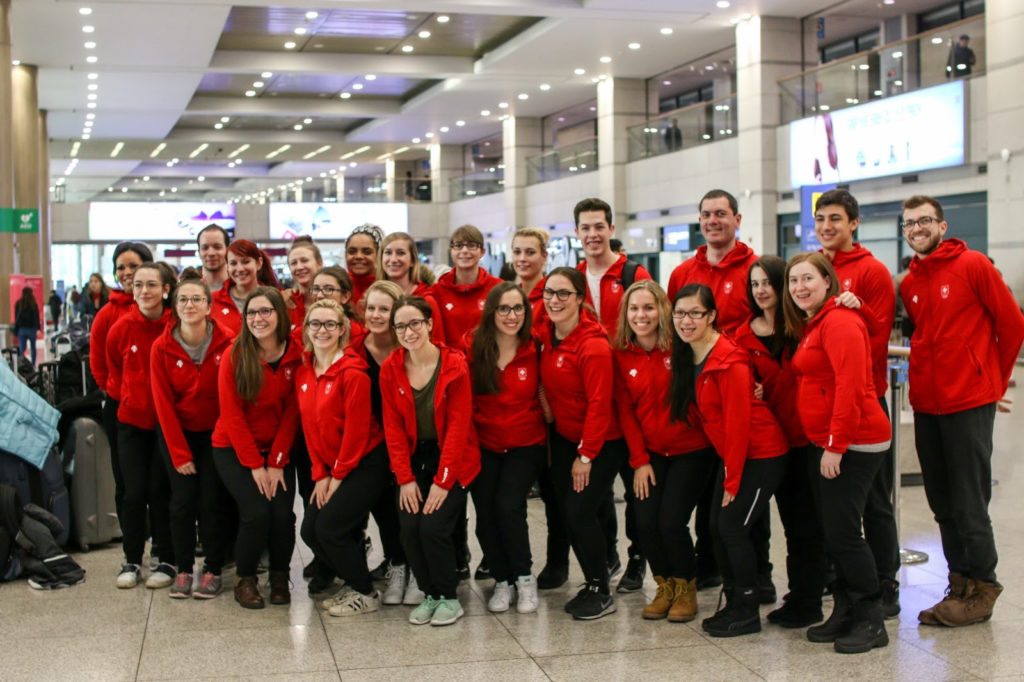 How was your trip organised?

Many things were unclear in the beginning. We honestly thought that it sounded too good to be true. The KCA offered to organise the whole trip and pay for the flight, accommodation and even food – when they told us this, we started looking for hidden cameras. But it was no joke. Because the KCA had so much to organise, our tickets arrived only around mid-January. At that point, we knew it was actually happening.

One big concern were the weather conditions. It was supposed to be extremely cold in Korea, and we didn’t know exactly if we were required to perform outdoors. With no clue at all as to what exactly was going to happen, we boarded the plane to Korea on 17 February.

Turns out, the Koreans had it all figured out. A bus with a driver and an interpreter was waiting for us at the airport and brought us to our accommodation close to the olympic venues. Even our food was organized.

Okay, so you arrived safely – but what did you do there?

At that point, we still had no clue. We didn’t even know if they expected us to do routines only or also sideline cheers. There was a schedule, but they kept us on our toes with lots of last-minute changes. But in the end, it all worked out.

We had training facilities about five minutes from the university. The other teams (USA, Canada, Netherlands, Russia, Germany and Norway) trained in the same place. We had a great cultural exchange with them as well as with the Korean people! There were only a few mornings where we could practice, because our schedule was packed with appointments and performances. We had appearances (among others) at a press conference, a dinner, the House of Switzerland, the pre-closing ceremony on Medal Plaza and even the big closing ceremony. This last one was especially cool, because all cheer teams performed together; one team doing their performance while the others did a background choreography.

The day of the closing ceremony was absolutely crazy. All teams wore the same uniform: An orange jacket and black pants. We weren’t supposed to cheer for a certain country, but to show our sport and cheer everyone on one last time. There were 30’000 spectators in the stadium. All went well, and we showed a clean routine.

After that, we watched the rest of the ceremony from backstage. At the end we went back into the stadium to join the other athletes and dance all the stress away! It was amazing.

What were your personal highlights?

One thing that brightened up our whole trip was the incredible hospitality of the Korean people. They were some of the friendliest, most respectful and enthusiastic people I’ve ever met. Our interpreter and other staff – all volunteers! – didn’t hesitate to help us in various situations, even bringing athletes to the hospital to get medication. One of my athletes renamed South Korea “the country of smiles”. The spectators at all of our shows were so supportive, clapping and smiling even when we were just warming up our routine and marking it.

One of our biggest performances was on Medal Plaza. We were grouped with Team Canada, USA and Korea – some of the biggest cheer nations in the world. I thought we’d be something like their opener, warming up the crowd for the “Big Guys”. The organisers however hadn’t planned it that way. We performed right between those amazing teams.

The pressure was enormous, and honestly, our athletes were exhausted at this point both mentally and physically. We had a really bad public run through. It was -5 degrees, and we were performing in our cropped uniforms without a proper warm up, while the other teams wore their warmer training gear. We somehow missed the memo that we were allowed to do this, so there we were, a few minutes before going on stage, freezing and shivering with cold and some anxiety. We were going to represent cheerleading for the olympic world, and if we screwed up, this might seriously damage the image and jeopardize our olympic recognition.

Then, the music hit. We were on, and everything else was gone from my mind. This was just me, my team, our music, our performance and the sport we love. We forgot about our exhaustion and the cold and delivered a solid performance. Even the ICU officials came to congratulate in the evening. Of course, between Canada and USA we couldn’t wow the crowd with level. But they were impressed with our dedication to perform in uniforms, our showmanship and generally what a little country with so few cheerleaders could bring to the table.

Come on Flo, one more story!

Alright. One of my personal highlights was team Korea. None of them really spoke much English, so we couldn’t really communicate at all without interpreters. We were scheduled to perform before or after them several times, and in the beginning of the week we shared a whole day with them. Before our last performance in the evening, we didn’t have a lot of space to warm up, so we ran in circles with team Korea between some containers.

Out of nowhere, they started yelling our “Go Switzerland” chant. First one athlete, then two, and then the whole team was shouting along. Our team went with it and yelled as well, and when we were done, we started the Korean cheer.

The moment was magical. We shared our smiles and our chants, and despite the language barrier, everyone felt the Olympic Spirit in that moment. The games are about uniting athletes and all other people with understanding of culture, friendship, solidarity and fair play. You don’t need to speak the same language for that. We later went out for dinner with the Korean team. It was a little awkward at first, but we had a blast in the end, and promised to see them again at Worlds in Orlando. Which is in a few weeks!

Thank you for your story, Flo!

I was truly touched by what you experienced in Korea. In the end, cheerleading is about so much more than just cool stunts and nice tumbling tricks. Everybody can find their place on a team, and everyone can learn some life lessons on the mat. Best of luck to you and Eclipse in Orlando!

Check out some videos and articles published by Swiss media about this story:

Also, the videos from Spirit Fever Open are online, go check them out! The ranking hasn’t been published yet.

I’ll see you next week, when we dive deeper into stunting and look at what athletes need to bring to the table!