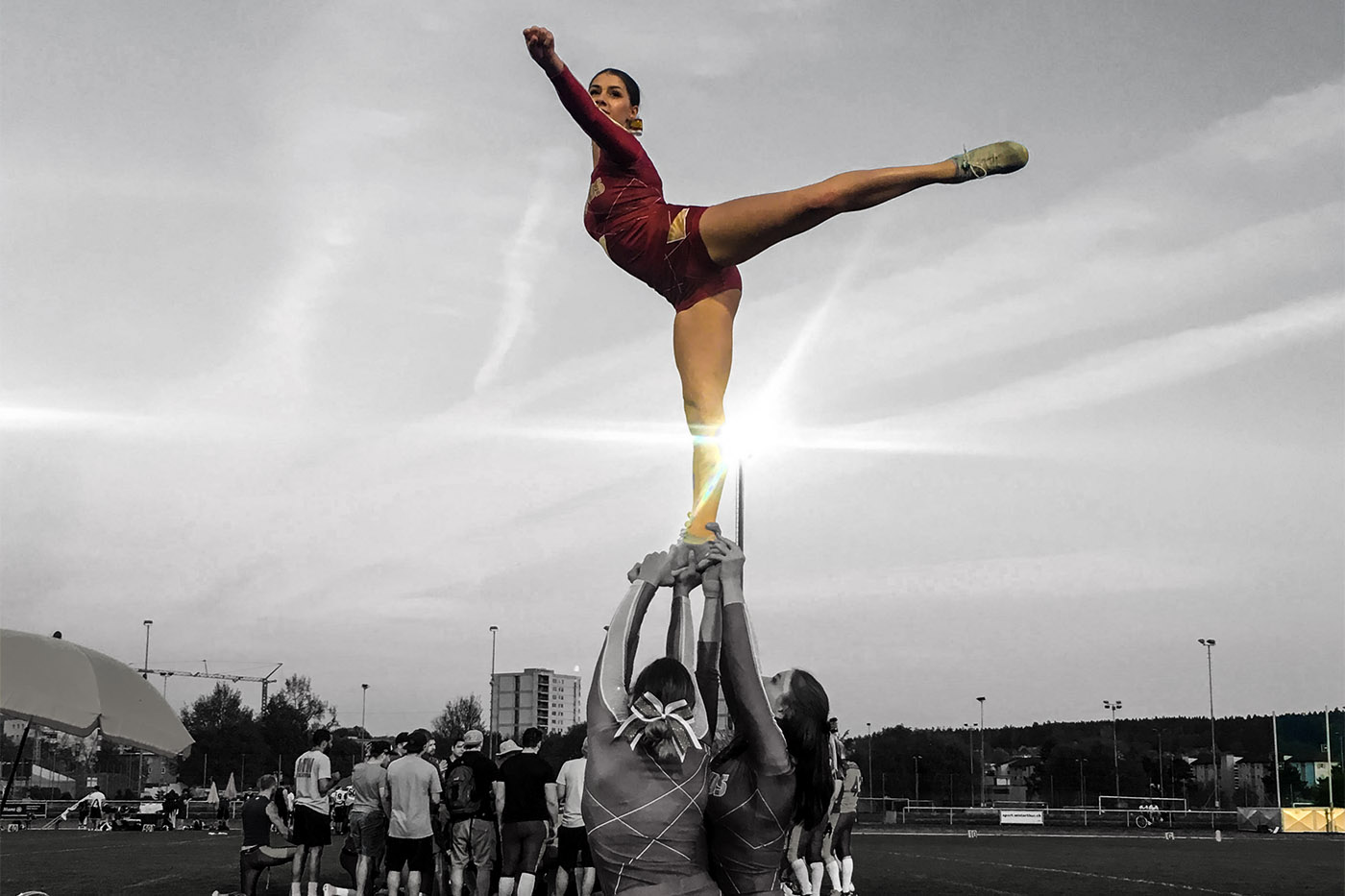 “She just needs to be light and flexible, right? ‘Cause all she has to do is stand there and look nice.”

In stark contrast to the often invisible position of back spot (last week’s post), a flyer tends to be the focus of attention at all times. They’re expected to make the hardest stunts look effortless and paste a smile on their faces. But don’t let the ease with which they move through the air fool you. Flyers need to be just as athletic as everyone underneath a stunt. With the added pressure of constant crowd attention, flying is a very hard thing to do.

Confidence is key. A flyer who isn’t confident in their own skill and the ability of their bases and back spots can’t perform well. They’re never allowed to look down. Not even when they’re falling. It can be scary when you realise your bases are changing their grip underneath your foot, or when something wobbles because their footwork isn’t on point; you have no idea what’s going on down there. Still, a flyer can show no fear. Scared flyers tend to glance down, wave their arms or bend their legs, all of which will throw them off balance.

In addition to that, the spotlight is always on the flyer. “Tina fell at championships,” is something people would remember. Who was the base that missed Tina’s foot, causing the stunt to fall? Nobody remembers. Tina fell. Of course, us cheerleaders know, and we’d never put the blame on a single person. But flyers need to be able to deal with the fact that spectators will think this way.

Even at practice, flyers are often the ones being corrected the most. In many stunts, their movement patterns are the most complicated compared to the other positions. This gives them a lot of opportunity to make mistakes. A base can often reuse a grip she’s already learned in a different stunt, while the flyer has to learn new tricks: take baskets, for example. For the base, it’s always a throw and a catch. For the flyer, each skill in the air is new and different. You need a lot of willpower and mental toughness to accept constant criticism, even if it’s constructive and meant well.

Flyers tend to be smaller than the rest of the team. This is not necessarily a requirement though. Coaches tend to choose taller flyers with more body control and aerial awareness over small flyers with a weaker mind-body connection. Similar to back spots, flyers can make a stunt feel considerably lighter if they use proper technique and have the necessary physical fitness. We call that “holding your own weight”.

Flyers need exceptional stability and core strength to hit stunts without wobbling. At the same time, they need explosive force to get up into a stunt quickly, which makes them lighter. They also need extraordinary flexibility, and the strength to pull body positions in the air. Believe it or not, for many flyers it isn’t their flexibility that’s blocking them from hitting certain positions. Even if you can sit in a split quite comfortably, you can have trouble holding your leg up in a stunt because you’re missing the necessary strength.

And no, she was not just born flexible. I can attest to that.

Flexibility cannot be achieved by stretching during practice two or three times a week. It has to be done daily, in addition to the conditioning every cheerleader needs to do on off days. Flyers put a lot of hard work into what they’re doing, and reducing them to “being small and skinny” is definitely not fair. Good flyers are some of the fiercest athletes who are always willing to put in the extra work.

I hope I gave you an impression of how much work goes into being a flyer. Next week, we’re going to look at the different aspects of basing!