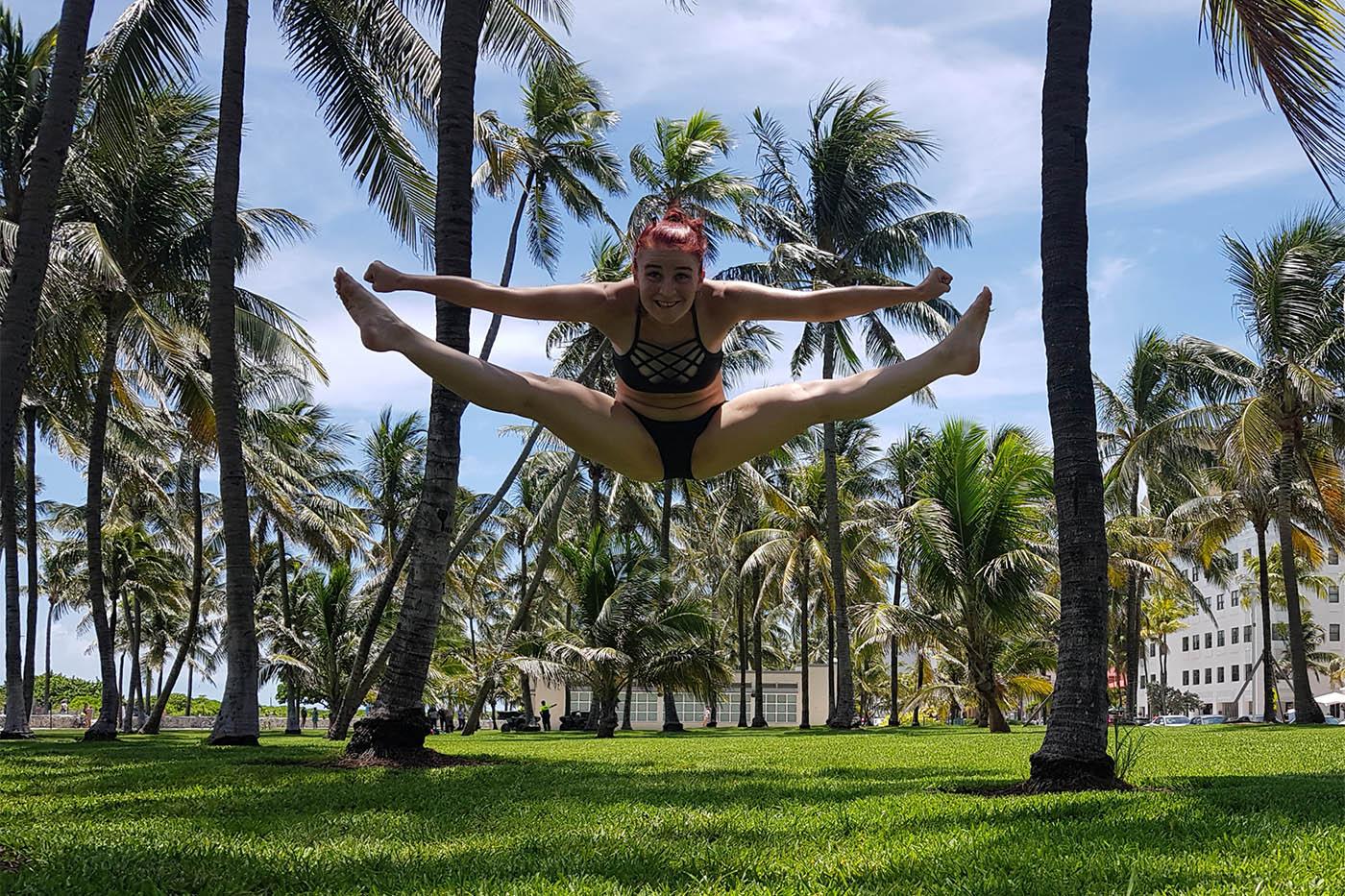 What’s the difference between Swiss Cheerleading and the American Allstars? Why are those teams so good? To find that out, I travelled all the way to Florida.

Why I haven’t been posting

I had a lot of things planned before I came to the US, but as we all know, life doesn’t really care about our plans. I wanted to make a few videos, but first my laptop and then my SD card failed. Also, I didn’t really get as much interesting footage as I wanted.

Writing, translating and preparing a good post takes me anywhere from 5-10 hours, and as these are my only holidays this year, I really wanted to kick back and enjoy myself before I get back into my weekly posting routine. After all, I do this as a hobby because it’s fun, and I want to keep it that way. I hope you understand. I will continue my weekly routine in September when I’m back in Switzerland. That said, here’s my first post from the other side of the Atlantic!

My first days in the US

After staying at a friends house with some girls from Warriors Diamonds for a few days, I headed out to my big adventure: Miami, Florida. Here’s why.

Yes, that Top Gun. I’ve been dreaming of visiting an American cheer team since I was about 13 years old (when camera phones and Youtube became popular and I could see the Allstars do their thing). Top Gun was my dream pick. I’ve been admiring their innovative routines and courage to try new things for years. So… I contacted them! They agreed to have me in their gym for a month so I can be a fly on the wall there and watch them work their magic.

My first day at the gym

Arriving in Miami all by myself, having never traveled alone or outside of Europe before, was quite scary. I felt lonely and lost, and I started to doubt my decision. What had I done? Why did I do this to myself? It only took 5 minutes at Top Gun to answer these questions.

The young woman who runs the front desk and whom I had been in contact with before welcomed me with open arms. She showed me around the gym (which she calls small, only 3 full-sized floors plus tumbling area) and introduced me to some of the other coaches. Everyone was incredibly welcoming. I told her how nervous I was about the whole journey, and she handed me a card with her cellphone number on it. “Just text me or call whenever you need to know something or when you’re stuck somewhere. I’ll help you out, don’t worry.” I just wanted to hug her after that.

After my introduction, I had the chance to shadow some coaches. A whole variety of teams were training throughout the evening, from Junior 1 to the Sick6. What struck me right away was how on every team, no matter how small they were or how low the level, there were athletes who gave it their all. The higher the level, the more of them I spotted (obviously). But I think it’s amazing that even on a Junior level 1 team, you can point out several athletes and say with confidence: in 5-10 years, they are going to be some of the best in the world. Their attitude, team spirit and the way they listen to their coaches immediately reveals that they will go far.

What I learned right away

There’s one prerequisite to everything these athletes are able to do: health and physical fitness. In this gym, nobody wears tape or bracers just because their joints are weak. If they wear one, they’re recovering from an actual injury.

Every gym back home has that one base where everybody knows: you can put her in any stunt, under any flyer and with any back spot, she’ll get it up there. Think of who that base is in your team, and clone her 20 times: there you have your Allstar team. Each and everyone of these girls and boys are serious athletes, and they prepare their bodies accordingly. This is the base on which they can build such great routines; I saw them use techniques that most Swiss teams could never do, just because they lack the strength to hold flyers up in those positions and grips.

We’re focusing on the physical here, but I’m sure I’ll do a post on mental aspects somewhere down the road.

Tumbling, as you might know, plays a much bigger role in Allstar cheer. A larger junk of points is given out for it at competition, and if you want to hang with the top dogs, you need to max out your team tumbling. This results in tumbling being a big part of the tryouts or team evaluations here. If you want to be on a level 5 team, you need level 5 tumbling. For reference, back handsprings are allowed in level 2 already, so we’re talking fulls and double fulls here.

To achieve that, you need several hours of tumbling practice a week. Compared to stunting in a group, high level tumbling takes way more strength and power. So just to get on the team, you have to get your body fit enough to endure regular tumbling.

Even in team practice (~twice a week usually), a big portion of the overall training time is dedicated to tumbling. This, however, is mainly for skill maintenance, endurance in routines and for timing. Skill acquisition is done outside of team practices: in classes, private lessons or just by coming in early and training on an unused floor. Athletes are given some small corrections during team practices, but nobody is spotting and teaching.

Honestly, I expected every flyer here to be tiny, in part because that has been a big part of the online conversation in the last two years. That’s actually not the case. On the junior teams, they have some quite small flyers, because their age ranges are different (approximately 7-14 year olds are together). It makes sense then to take the younger kids as flyers if they have the necessary skill and fitness, and boy, they do. I’ve never seen so many kids with sixpack abs before.

On the senior side however, I met a lot of flyers who are around my height, which is 1.60. That’s no smaller than we have them in Switzerland, so no more excuses! It’s not the tiny flyers; it’s the bases who are beast.

There’s a lot of other factors playing into the success of these teams, but I wanted to write about this one first because it’s necessary for anything else to work. To become a good cheerleader, you don’t need to be talented in cheerleading: you need to be athletic. Think about it. The people who joined your team and progressed very fast, what did they all have in common? Have they done cheerleading before? Probably not. Probably they just came in with an athletic past and some basic strength that they could work with.

Physical fitness has so many benefits. Conditioning your body doesn’t only give you the necessary strength and speed to stunt or tumble, it also improves your awareness. You learn how to move your body, to become more focused on what your limbs are doing and how certain movements are supposed to feel. You get to know yourself, how far you can push, and you learn how to assess pain or injuries.

All in all: Physical fitness is one of the big pillars this sport is built on, and if you’re not willing to achieve exceptional fitness, you will never be one of the best. The beauty about this is that everyone can become fit, it doesn’t require any talent, just dedication.