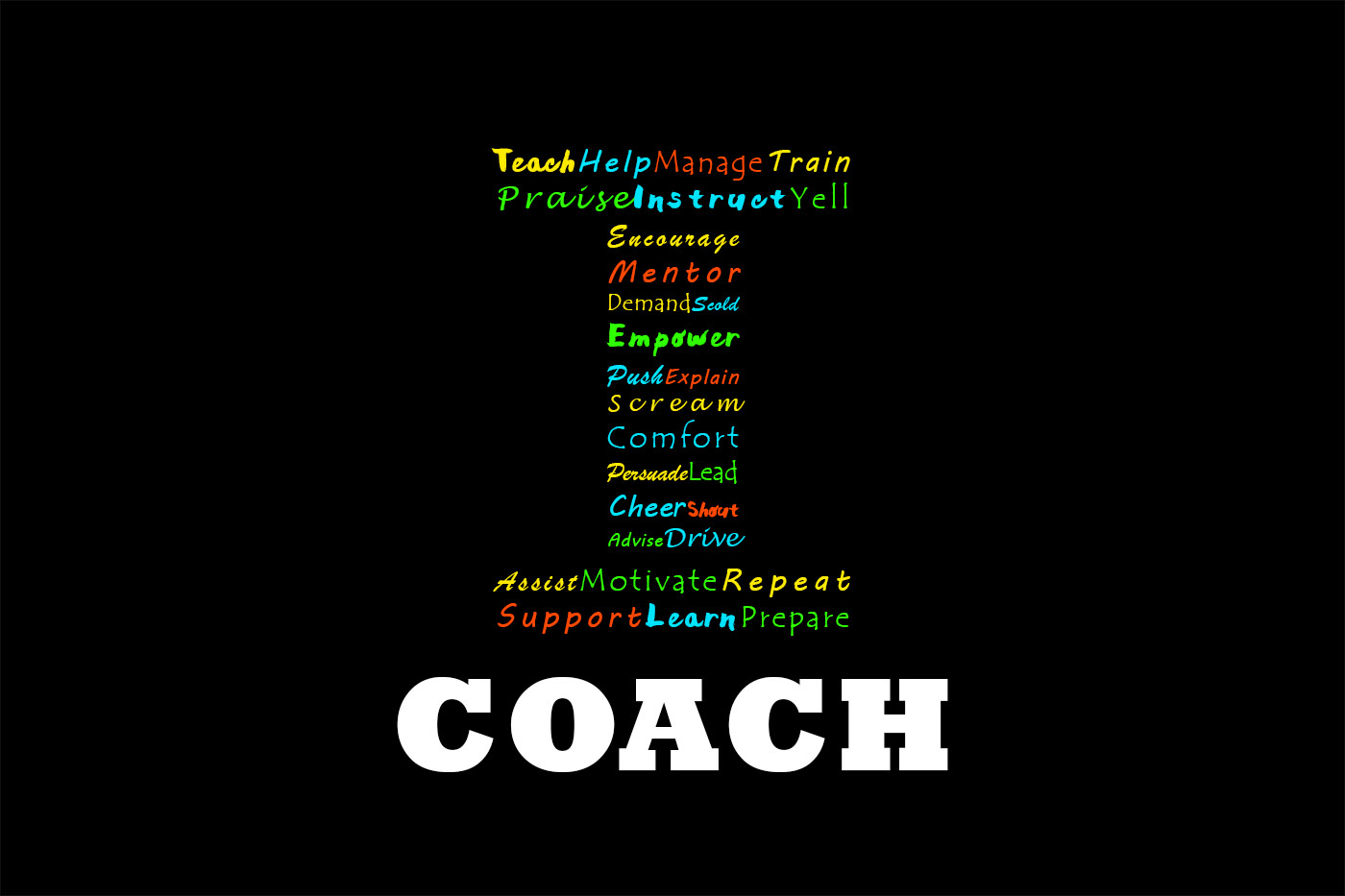 There’s a group of people we haven’t yet talked about in depth on this blog. Even though they tend to be the most dedicated and motivated people on our Swiss cheer teams, they often fly under the radar: Our coaches. Today I’m sitting down with Coach Guillermo Daruich – or Coach Memo for short.

Coach Memo first came to Switzerland as an import football player for the Winterthur Warriors in 2011 and got to know his now-wife Luli, a long-time Warriors cheerleader. After going back and forth between Mexico and Switzerland for a few years, Coach Memo recently took over as head coach of the Warriors First Team. As a side benefit, he drops in at our gym from time to time and we profit a great deal from his support 😊

Be it football, cheerleading or water polo: Coaching is coaching, and in the short time he’s been here, I’ve already learnt a lot from this amazing coach. So I thought for inspiration, I’ll share his experience with you, fellow coaches, and all athletes who think about one day choosing this amazing route in their sports career!

Coach Memo, how did you get started in coaching?

I started coaching our little football peewees when I was around 21 years old. They’re the really tiny ones, under 8 years old, but they already train with full pads and everything. It’s a good way to start the athletes early in the sport, they learn through having fun. When they’re that little, they play mixed, so there’s boys and girls on the field. This is where I started my social service, with that school team. At the same time, I was playing football myself for the university.

Why did you decide to start coaching instead of fully focusing on your career as an athlete?

Playing football was my full-time job at the time. I thought if I’m already a full-time athlete, why not incorporate my social service into the sport as well? It wasn’t that I planned on becoming a coach from the beginning, it was just a good way for me to give back.

Was there a specific moment when you decided you wanted to put more time into coaching?

At that point, it didn’t cross my mind really. I was never thinking about starting a coaching career, I was just enjoying training the little guys. With kids especially, it’s great: They completely trust in you as a coach, they listen to you, no matter what you say they always believe you. I remember having this one little girl, she was tiny, and I was explaining to her how to hit (you know, with the pad and the helmet, not just hitting random people 😉 ). I told her the right way to do it, and I said to her “that’s how you have to do it, and you’ll be fine. Maybe someday you will get hurt, but you can always continue”. And she was a beast! She blocked, she got hit, but she lost her fear of the contact and really went all out. One day she got hurt, and she said: “It’s okay, I’m fine, I’m just crying now a little bit because I’m sad, but it’s okay and I will be back, Coach.”

That was a great moment. It’s when I realised how cool it is to help someone get better and help breaking that mental fear of the sport. Still, in this moment I wasn’t thinking of having a coaching career or even of working in the sport as a future job at all.

The moment I realised I wanted to expand my knowledge of football and really get into coaching was actually here, in Switzerland. In my first year as an import for Warriors, I helped coaching the junior team. It was a similar situation as before, but now it wasn’t little kids, it was teenagers. They have other issues, some come from difficult family backgrounds or have problems at school, but they found this new focus: their sport. It makes them feel better to be part of something. They learn that athleticism is developed with discipline and work, which is an important life skill.

There were a few kids with some anger and aggression issues, but on the field they could let out a lot of that pressure, and some of them even realised that they were actually really good players. It was nice to be able to take this negative energy and form it into something productive together.

After the season, you went back to Mexico.

Yes, and I started coaching the junior team from the university there too. Coaching teenagers is very different from coaching adults, I enjoyed it a lot. From a personal perspective, kids trust their coach more than adults. They don’t doubt you usually, they believe in your knowledge of the sport. The seniors are at a different point in their life, and sometimes you don’t agree with their opinions as a coach. That doesn’t mean I don’t like coaching adults, I enjoy both now – but at the beginning, I felt way more comfortable with juniors.

How did you transition into this full-time coaching position you’re in now?

I think once you realise you want to go deeper into coaching, it’s good to find a person that you respect and admire and ask them for support. I had several people like this. I approached my then O-line coach, whom I deeply respect, and asked him what I needed to do to get better at coaching. He told me that first, you need to know about the human body – how an athlete works, the biomechanics, strength and conditioning, injury prevention and recovery. We’re not doctors, but knowing how the body works will make you a better coach and enable you to help your athletes. This coach also had a gym, and I went to work there with him. It was all based around functional training, and I worked a lot with elderly folks, pregnant women, overweight people, big iron-man competitors – it was a great variety of different athletes with different needs and a perfect learning environment.

The second person I approached was a teammate who was a senior on the team when I started as a rookie. He was very deep into sports psychology. He knew that I was studying communication science which had nothing to do with football, but he told me to go get certified in sports psychology in addition to that. Most coaches only thought about the sport, the tactics and the techniques, but not a lot of good coaches put enough attention to the mind inside the athlete, the person behind the action. If you can understand and teach both aspects as a coach, you will bring your athletes to a whole new level. Luckily, when I got hired as an assistant coach at my college, I received the chance to study for free, so I completed my Master in sports psychology there. It was great, because as soon as I learned something in class, I could directly apply the knowledge with my players.

If you could go back in time and give your younger self a piece of advice, what would you say?

Do it again. Good and bad.

And if you could give advice to a young or inexperienced coach who wants to get better?

Learn, and trust in yourself. Most importantly: Give the best of you to somebody else.

The profession of coach, it’s a lot: It’s not just a teacher, it’s not just someone who knows a sport, it’s helping. This is the real deep meaning of being a coach. Help. You start to get old, you stop playing, but you still have so much passion for the sport and the discipline, so you go and help someone else be better.

Coaching is not just about the sport. Just coaching a sport or a technique is not enough, it won’t bring success. It’s about having an impact on someone else’s life. You don’t train a body, it’s not just a bag of skin and bone, you train a whole person. That person doesn’t only exist in the two hours they’re with you, they also have school and work and family and friends. If you can help a person have a better life by giving them everything you have in the few hours you see them, that’s when you have a real impact. Coach the person inside the uniform.

Also, to get back to your question: what makes an inexperienced rookie coach into an experienced coach? There’s not a number of years or an age you have to be and suddenly you’re an experienced coach. It’s confidence. The personal side of the individual coach. If you are confident, even if you only coach basics, you coach like an old coach. Doesn’t matter how young you are.

The coach is still a person. The coach has emotions and makes mistakes. What makes the difference between a rookie and an experienced coach is the belief in himself, and that he doesn’t let his emotions get in the way of his coaching. Usually, that happens when you get more comfortable as you get older. As soon as you get more secure and confident in yourself, you can take better decisions for your athletes. Your communication skills improve, and you start really enjoying the profession of coaching, because you’re not stuck with your own emotions. The athletes on a team are a reflection of their coach; if he has a lot of ups and downs, the athletes will too. We’re still humans, we still have emotions, but as long as we keep ourselves emotionally stable, we take good decisions, and the athletes will reflect that.

You’ve heard it, coaches: Your athletes reflect you. If you see issues within your team, take a good long look at yourself and think about what you can change in yourself, and you will see change within your athletes too. 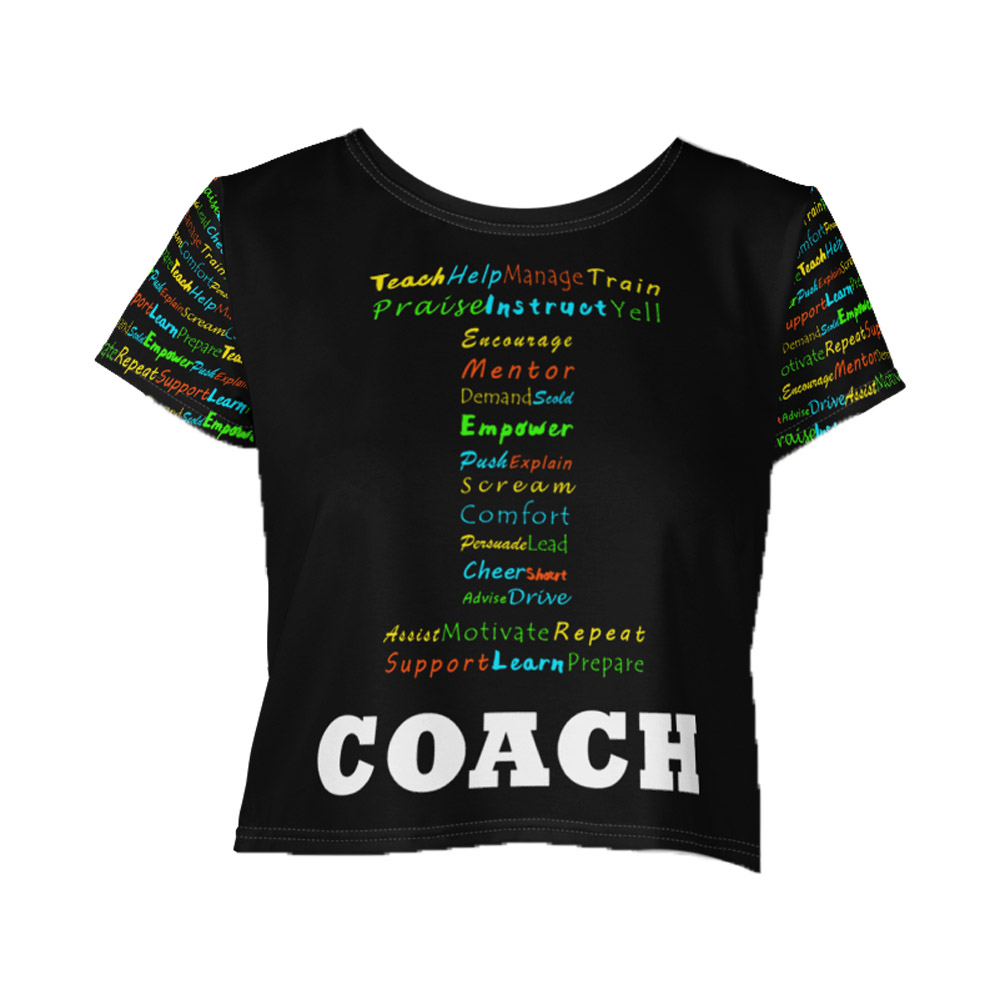 Need a reminder of all the things a coach gets to do? I have just the right shirt for you! Head over to the brand new Cheer Up Schwiiz Shop and get your very own “I COACH” crop-top. Male coaches, if you want one just write me an e-mail, I can hook you up with a male version too 😉