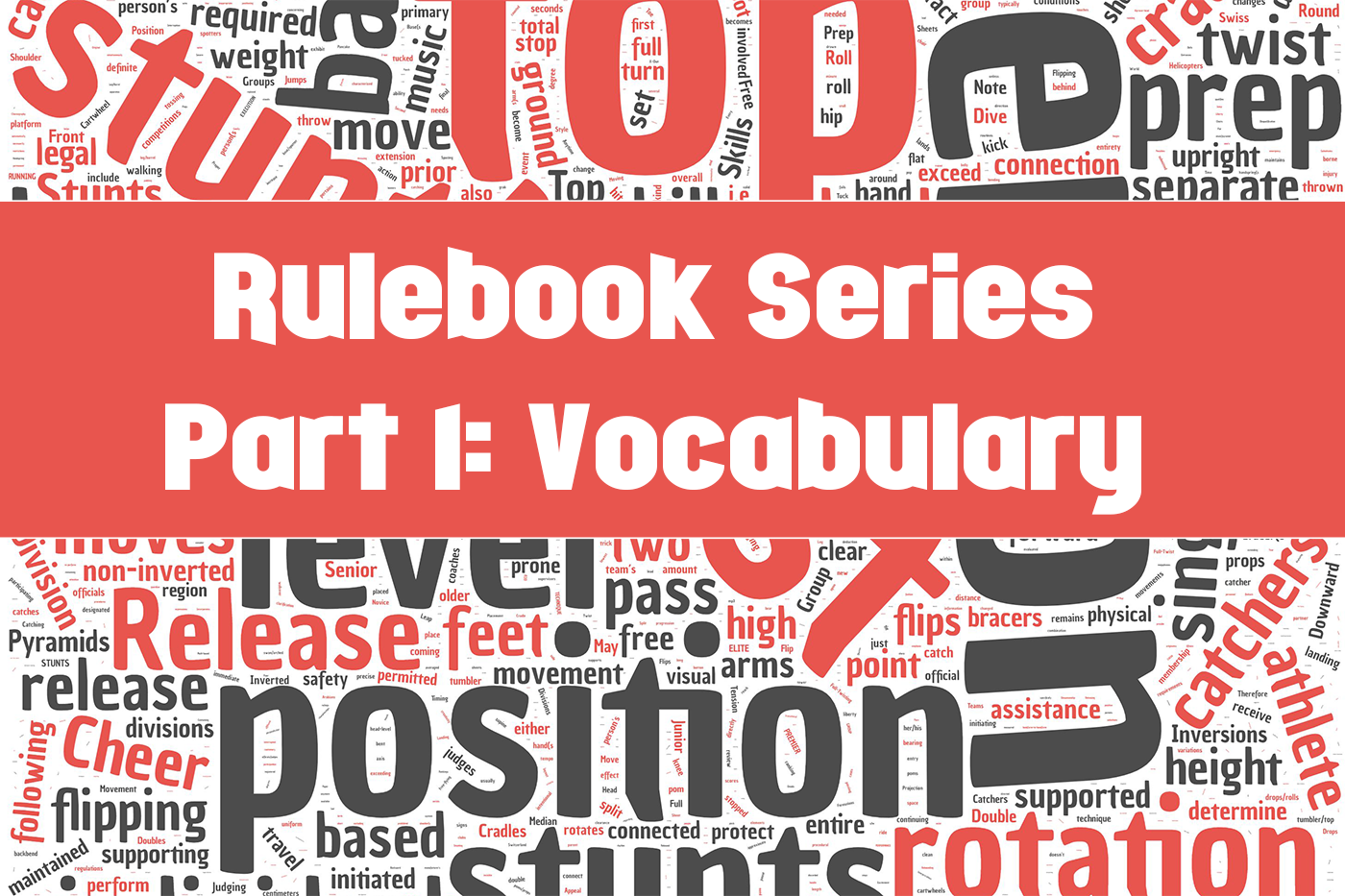 The rulebook can be a bit intimidating: It’s big, it’s sometimes hard to decipher, and it’s only available in English. Still, failing to stick to the rules can easily make the difference between first and last place. This post should help you navigate the rulebook and understand where to find what.

It’s important to always consult our own rulebook. You cannot rely on what you see on videos: there’s big differences between Allstar Cheerleading and ICU Cheerleading, for example. Even in ICU or ECU competitions, you never know if what they did was actually legal or if they’ve received a deduction for it! Also, keep in mind that the rulebook only talks about what’s legal and what’s not. It has absolutely nothing to do with your scoresheet.

Here you’ll find anything from registration rules to age grids. A Head Coach should read this before the season starts and make sure they have the right amount of athletes at the right age in their teams, they know how the registration works and they know how to communicate with the judges in case something goes wrong.

For a long time, I thought: “I know what is called what, I don’t need to read the Glossary”. Boy was I wrong, and it almost cost us a championship once. Did you know, for example, that the word “Dismount” is defined like this:

“The ending movement from a stunt or pyramid to a cradle or the performing surface.”

Sounds easy enough, but what if I told you that the word “Cradle position” is defined like this:

“Base(s) supporting a top person by placing arms wrapped under the back and under the legs of the top person. The top person must land in a “V”/pike/hollow body position (face up, legs straight and together) below prep level.”

So, in terms of legality, if your flyer lands on their belly in what we call a “Front-Cradle” or “Prone-Cradle” or whatever you might have named it, it is not a dismount. The dismount rules don’t apply to it, but you will have to follow the stunt rules. Crazy, huh?

This is why you absolutely need to read the Glossary of Terms, or at least look up the terms you’re not 100% sure about when you’re reading the rules. If you have a hard time understanding the Glossary, ICU offers a video version on their website.

Read them. You don’t want a deduction only because you forgot that all of your flyers need to have one foot on the ground when the music starts.

“Fun” fact: I once received a deduction because we started our cheer-portion with a Stunt, not a Chant. This is not in the rulebook, but we still received the deduction, because in those few seconds where I listened to the judge in shock, I couldn’t remember if it was an actual rule or not. You only get a very brief moment to argue your case if something happens, and you better make sure you know your rules in detail when it comes to that, because once the judges made a decision, it’s final. Doesn’t matter if it’s correct or not.

I’m not going to go through each of the rules, but I’ll explain the basic vocabulary you need to understand this part. For the new levels (Junior 3 and Senior 4), I will make separate posts where we can go through what’s allowed and what’s not allowed in detail.

The rulebook usually tells us what’s forbidden. So if you cannot find a rule that specifically tells you something’s not allowed in that level, it is allowed.

Each level is structured in the same way. Let’s go through the different parts every level has.

Let’s first look at the Glossary definition of tumbling:

“Any hip over head skill that is not supported by a base that begins and ends on the performing surface.”

We can also learn from this that tumbling with a spotter is not tumbling anymore, because it’s technically supported by a base if the spotter touches the tumbler, and thus has to follow stunt rules.

Here’s the definition of Standing Tumbling:

“A tumbling skill (series of skills) performed from a standing position without any previous forward momentum. Any number of steps backward prior to execution of tumbling skill(s) is still defined as “standing tumbling”.”

And this is the definition for Running Tumbling:

“Tumbling that involves a forward step or a hurdle used to gain momentum as an entry to a tumbling skill.”

So if we do a cartwheel with a small step or hop before it, that would be running tumbling. But if we run backwards across the whole mat and then do a back handspring, that’s still standing tumbling.

In lower levels especially, there are rules about what you’re allowed to connect without a break. Sometimes you have to break up a running pass with an additional step or hop to make it legal. Once you know what tumbling you want your athletes to do in your routine, read the tumbling rules for your level and make sure to look up each of your skills in the glossary.

Which stunt needs a spotter is different for each level, but what constitutes a spotter always stays the same. Here’s the glossary definition, read it very carefully:

A person whose primary responsibility is to prevent injuries by protecting the head, neck, back and shoulders area of a top person during the performance of a stunt, pyramid or toss. All “Spotters” must be your own team’s members and be trained in proper spotting techniques.

In short, what’s important is that a spotter cannot be underneath a stunt because they must be able to immediately let go and catch the flyer if something goes wrong. Spotter rules have changed over the years, so here’s a few reminders:

If someone counts as a spotter or not can very well depend on how well they execute technique. If you need a spotter for an assisted partner-stunt liberty, your assist can act as the spotter if they have their back hand at the ankle of the flyer and not underneath the foot. However, if you draw a line straight down from your flyer’s bellybutton and that line hits any part of the torso of your assist, they are immediately counted as a base and not an assist, thus not a spotter. It’s important your athletes know those rules while stunting.

Here’s a handy graphic that I borrowed from the 2018 ICU rulebook, I’m sure they don’t mind: 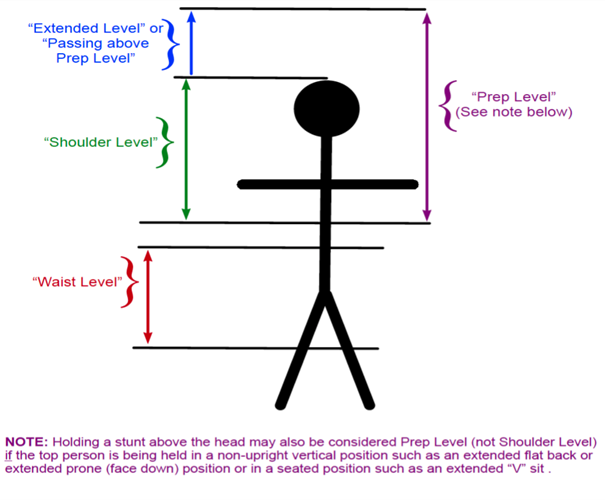 You will see these different heights all over the rulebook, and you need to know them in detail. For example, I usually tell my athletes to get up into an elevator with power, so they pass above the height of where they will hold it and come back down. If elevators are only allowed “at shoulder level” however, and my athletes pass the flyer’s foot above their own head, that would be illegal, because that is “passing above prep level” or “passing through extended level”.

“Shoulder level” is very strict: The lowest connection between base and flyer (usually the flyer’s foot) has to be at the shoulder height of the base. No exceptions.

“Prep Level” is a bit more flexible. Here, the lowest connection is above waist level and below extended level, so there’s a bit of range. Additionally, some stunts where the bases’ arms are extended also count as prep level; an extended V-sit for example. Compare where the flyer’s shoulders are in an elevator. In a V-sit, the flyer’s shoulders aren’t higher in the air, which is why from a safety perspective, it still counts as prep level.

This info and more detail about it is in the glossary! Look for “Prep-Level” or “Shoulder Level”.

Now that we have some basic vocabulary, we’re ready to apply that knowledge. In the second part of this series, we’ll take a closer look at how to find the right rules and go through some examples.