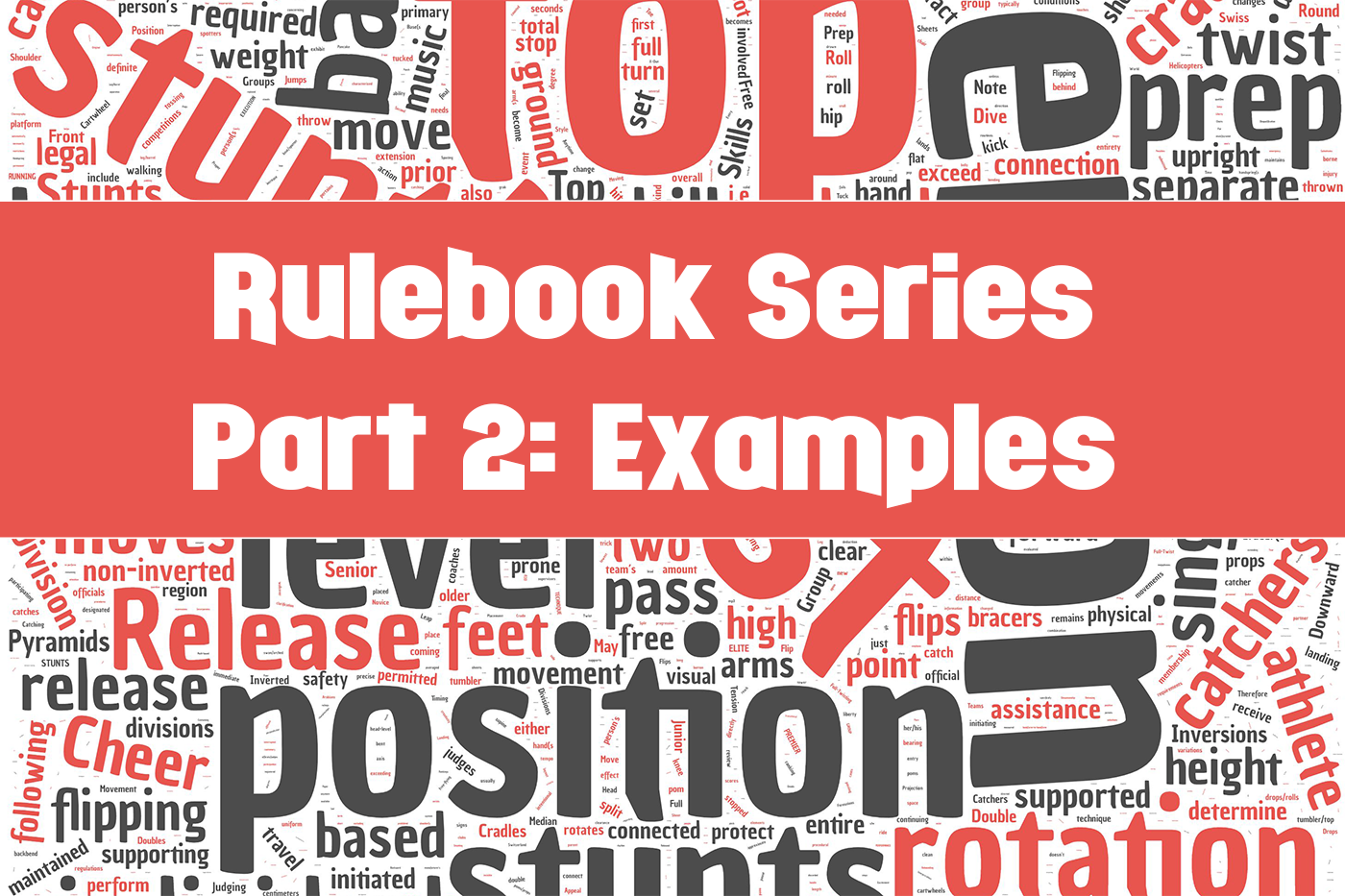 Now that we have some basic vocabulary from the last post, let’s look at how to find what you’re looking for. These are the chapters that exist for every separate level in the rulebook:

To find out where you need to look for a specific rule, ask yourself the following questions about your stunt. If the answer to one of them is yes, check that part of the rulebook and then ask the next question.

Inside the “Pyramids” rules, you can basically ask the same questions and look up the special pyramid rules on it. If “Pyramids” doesn’t say anything about what you’re doing, you have to go back and check the regular stunt-rules on it.

What if it’s a “Yes” for several questions?

If it’s a basket toss or a dismount, you can ignore the other stuff. So for a double-down from elevator, you don’t have to check the “Twisting Stunts and Transitions” rule, as long as you land in a normal cradle.

However, if you do a handstand on your bases’ shoulders and then push it to an elevator, you have to check several chapters: Inversions (for being upside down), the subsection on Downward Inversions (because before you push, you travel downwards for the dip), and Release Moves (because everyone lets go of the flyer before they catch in an elevator).

Example 1: Half-up Tic-Tock from the ground to an extended Liberty in Level 3

We look at “Twisting Stunts and Transitions” and “Release moves”.  The rule on Page 35 (Median Stunts C.3) says:

“Twisting transitions to and from an extended position may not exceed a ½ twisting rotation.”

Oh no – we’re not allowed to release to extended level at all! But what about the same stunt to Low-Liberty? Rule on Page 36 (Median Stunts I.5):

“Release moves are restricted to a single skill/trick and zero twists.”

Unfortunately, still not allowed. How could we make this stunt legal? We could have the backspot hold on to an ankle from start to finish! Then, the Release Move rules don’t apply anymore, and the twisting rules allow us to do a half twist to an extended Liberty. Alternatively, if we want to practice free Tic-Tocks, we could also do a straight-up Tic-Tock to Low-Liberty.

We don’t see this cool tumbling trick a lot in cheerleading, but it can make for some very cool transitions. It has its own glossary entry:

“Starting from a back hand-spring position after pushing off, the athlete performs a ½ twist to the hands, ending the skill as a front handspring step out.”

Here’s a video. Now let’s go through the tumbling rules, starting at the top of Median (Level 3) General Tumbling on Page 34. Yes, we start and land on the performing surface, we don’t do it on top of anyone, no props involved. So far so good, we’re fine with the General Tumbling rules.

We start backwards, so an Onodi is definitely standing tumbling, no matter how many backward steps we take to start it. The rules say that Flips are not allowed, and Flips are defined in the glossary:

We do touch our hands to the floor in an Onodi when we’re upside down, so it’s not a flip. Still allowed so far. A Series of front and back handsprings is also allowed, but this is not a real handspring, this is an Onodi, so that rule doesn’t apply to us. Then there’s rule C:

“No twisting while airborne. Exception: Round offs are allowed.”

Here’s the definition of the adjective “airborne”:

“To be free of contact with a person or the performing surface.”

In Running Tumbling, there are more exceptions, but none of them applies to the Onodi. You can’t say “well an aerial is almost like an Onodi, I’m sure the rule applies”. If it’s not specifically mentioned, the Onodi is not one of the exceptions. At the end of this section, the final rule is also: No twisting while airborne.

This makes the Onodi illegal for level 3. In level 4 however, the Onodi is specifically pointed out as an exception and is legal in both Standing and Running Tumbling.

Example 3: Toss up to Liberty, connected on both sides to another flyer in Level 3

We’re connected to other flyers, so we definitely have to consult the pyramid rules. Let’s start at the top, Page 35 Median Pyramids: We have to follow the Stunt and Dismount rules. So if it doesn’t say anything about the skill we want to do here in pyramids, we have to go back and look at the stunt rules for it.

The second rule tells us that there are exceptions to this, and it tells us where to go:

In our toss up, all the bases let go of the flyer, so we have to look at those exceptions and hope there’s something in there for us. Let’s see what the Pyramid Release Moves rules say. (I assume this toss up is braced by 2 flyers in an elevator, so we can ignore rule C here).

“Any skill that is allowed within the Median Division Pyramid “Release Move” is also allowed if it remains connected to a base and 2 bracers.”

This is only the first sentence, it talks about staying connected to not only 2 bracers, but also a base. That’s not what we want, we want to toss freely. Let’s read on:

“Anytime a top person is released by the bases during a pyramid transition and does not adhere to the following four rules, the top person must land in a cradle or dismount to the performing surface and must follow the L3 dismount rules”

Alright, so if we want to catch our toss in a Liberty, we have to follow the next 4 rules:

“During a pyramid transition, a top person may pass above 2 persons high while in direct physical contact with at least two persons at prep level or below. Contact must be maintained with the same bracers throughout entire transition.”

Confusing? When in doubt, consult the glossary! It tells us what a “Two-high Pyramid” is:

“A pyramid in which all top persons are primarily supported by a base(s) who is in direct weight- bearing contact with the performing surface. Any time a top person is released from their base(s) in a “Pyramid Release Move”, regardless of the height of the release, this top person would be considered “passing above two persons high”. “Passing above two persons high” does not relate to the actual height of the top person but to the number of layers to which they are connected.”

So yes, the naming is very confusing, but what it actually means is: If you are in a pyramid, and you do absolutely anything that creates the situations where your bases and the backspot let go of the flyer, but the flyer is still holding on to another flyer who’s in an elevator, this flyer is “passing above 2 persons high”. Even if it’s just a tiny dip from sponge to sponge where everyone lets go.

So what the rule above means is: If you have 2 other flyers in an elevator holding a release move, you don’t have to follow the stunt rules for release moves. But if there’s one of these 4 rules (E.1-E.4) we’re reading that it doesn’t meet, it has to land in a cradle or the floor and has to follow the dismount rules instead. Let’s read the two clarifications for this first rule:

Clarification 1: Twisting stunts and transitions are allowed up to 1 twist, if connected to at least two bracers at prep level or below with arm/arm connections. The connection must be made prior to the initiation of the skill and must remain in contact throughout the skill.

This is irrelevant for us right now, we’re not twisting.

This means that if you’re allowed to do a release move alone as a stunt, you don’t have to do it with 2 bracers in a pyramid, 1 bracer is enough. But as our toss up Liberty wouldn’t be legal as a stunt in level 3, this rule doesn’t apply to us.

Rule number 2 details how we need to brace the stunt. These are easy to stick to with our stunt. Make sure your bracers hold on before the toss starts and are still holding on when it lands.

Phu, that was a really hard! But it seems like we fulfil all the criteria and we’re allowed to do our toss up liberty with 2 bracers. Again, this is my interpretation of the rules and I don’t know everything. If you have this stunt in your routine, send it in to the SCA to be 100% certain if you’re not sure. The proper procedure for that is described in the rulebook on page 10.

If you’ve read through all of this and you’re still here, congratulations! My head is smoking from thinking about that pyramid move. The next post is going to be a lot easier to follow, I promise! We’ll look at level 3 specifically and talk about what is allowed and what’s not.