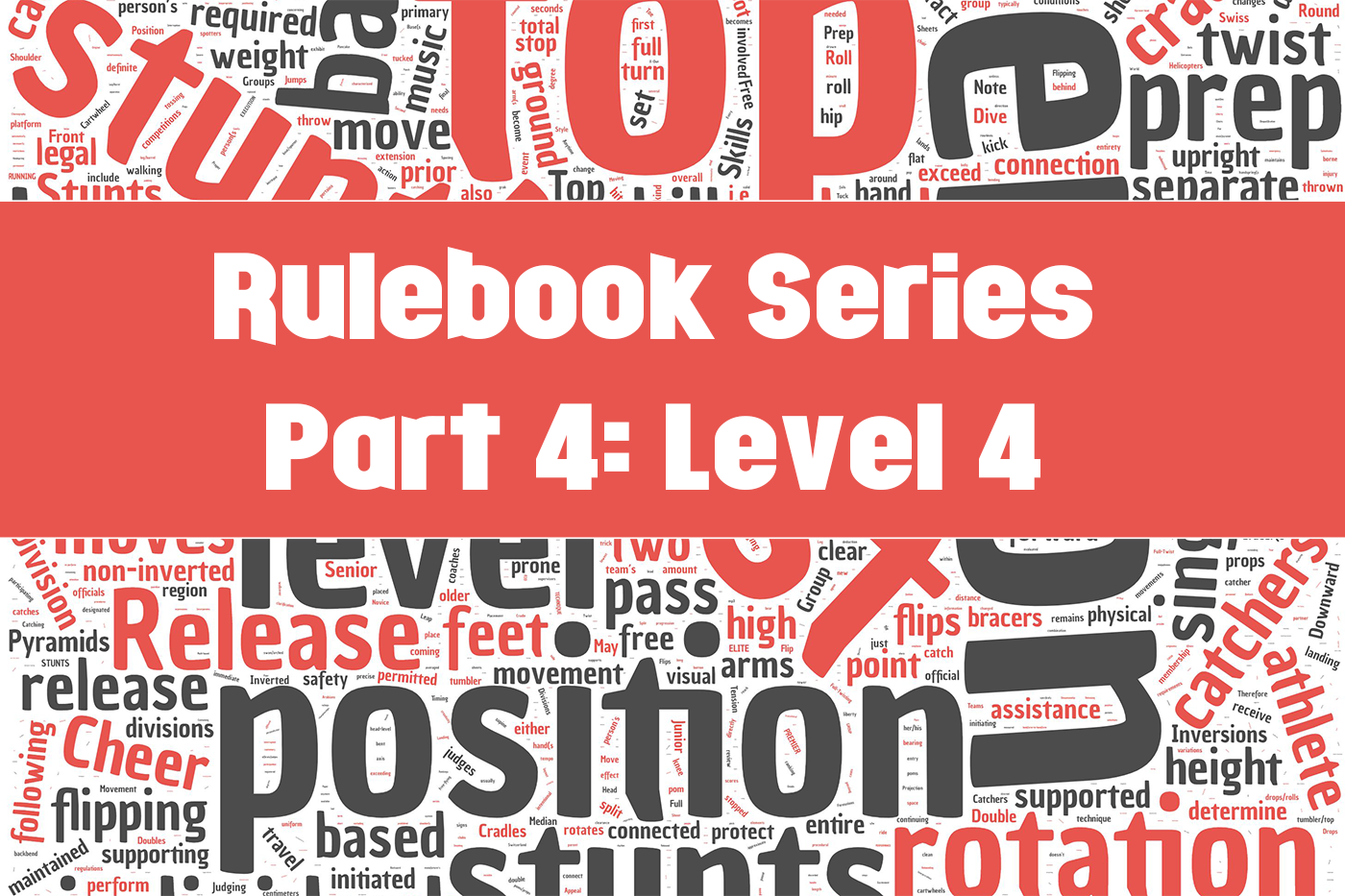 This is the fourth and final part of our rulebook series. To keep it “short”, I won’t repeat all the information we’ve already established in parts 1-3, so make sure you read those first or refer to them if there’s anything you don’t understand:

As always, the rulebook has final say about what’s legal and what isn’t, so make sure to check your specific skills in the rules. Let’s dive into level 4 and what you’re allowed to do there.

In advanced running tumbling, you can do whatever you want, except twisting. So no full twisting layouts here. The only exceptions to this rule are Onodis and Aerials. If you have a front handspring – front tuck – round off – back handspring – whip – layout, show it off, this would be an amazing level 4 tumbling pass.

There’s a few rules for standing tumbling, so here’s a list of what you can’t do there.

You are allowed to do Jump back handspring back tuck, you just can’t directly connect the jump to a flip. Also keep in mind that a jump breaks up the running tumbling, so if there’s a jump in your pass, everything after it has to follow standing tumbling rules.

There are too many level 4 stunts to list, but I’ll write down a few for inspiration. These are all true level 4 stunts, meaning that they’re not yet allowed in level 3, so you will want to have at least some variations of them in your routine.

As you see, the list is long, and it’s not even close to complete. I feel like the most “limiting” rules in level 4 (when you compare to level 5) are these:

As always, you have to be a bit careful with inversions and especially downward inversions, but as long as they don’t twist they’re mostly allowed.

As usual in lower levels, our tosses aren’t allowed to flip or travel. You can do up to 2 tricks, for example pike-split or kick full. The word “trick” isn’t explained in the glossary, but judging from the examples they give I personally assume that they count a twist as a trick, though I’m honestly not sure. In any case, you’re allowed to do 2 and a quarter twists if you’re only twisting (like a double superman), but if you want to do anything else then twisting, then you’re only allowed 1 and a quarter twist. That could be a full-up toe-touch or a pike full down or whatever creative combination you can come up with – just no kick-doubles yet.

Here, we have the same dilemma I had in level 3; there’s just too many options in pyramids for me to talk about. I can really only give you some pointers on popular things, but it’s best you come up with the pyramid you want to do first and then find a way to make it legal by reading the rules carefully. Here are some tips.

With braced flips, execution matters: your top flyer is not allowed to travel downward while she’s inverted. Make sure there’s a good push, your flyer finishes the flip at the very top of the height, and then travels downwards in a cradle position. Especially in waterfall-style elements, this can be difficult. If you execute poorly, you might get a deduction. As always, be sure to read the pyramid-specific spotter rules and check all of your elements very carefully against the rules.

Thoughts on when to do level 4

That’s it! As you can see, the jump from level 3 to level 4 is a big one. You have very few limitations with level 4 when we compare to the overall level of what our Swiss athletes are currently capable of. The only staples in our current repertoire that are missing are high-to-high or low-to-high Tic-Tocks, double downs from Liberty and maybe the odd kick-double basket toss.

What does that mean for us? Should we all do level 4? I don’t know, and I think the only one who can judge that is a coach for their own team. It’s tricky, because there are a lot of level 4 stunts that are definitely harder to do than the easier level 5 stunts. When are you ready to compete level 5?

In my personal opinion, if you don’t have at least a handful of true level 5 stunts (with your whole team) in the first quarter of the season, you’re probably not going to have a lot of fun in level 5. Here are some examples of stunts that judges typically want to see in level 5:

In Tumbling, being Swiss gives you some leeway, because the level isn’t very high across the board yet, but you should still be aiming for flips with a majority of your team. Internationally, you’d be looking at fulls.

If you have none of the above stunts with your full team a few months into the season, Senior level 4 is probably the safer bet for you. As we learned today, level 4 can also be incredibly difficult, but it’s also the level where you can pick up a lot of the same techniques that you’ll be needing in level 5. Investing time in solid kick-fulls, double-downs, full-ups with traditional grips and straight up Tic-Tocks is incredibly valuable for any athlete, especially if they want to compete level 5 in the future.

Let’s not forget that a lot of the best teams in the world stunt level 5, so it’s frankly ludicrous to get athletes in their first or second year of training to even attempt it, let alone compete it. With that said, the safety concern in level 5 is not that much bigger than in level 4, so this really is a coach’s decision to make. Look at your team and decide what’s best for you – you’re the only one who can judge it properly.