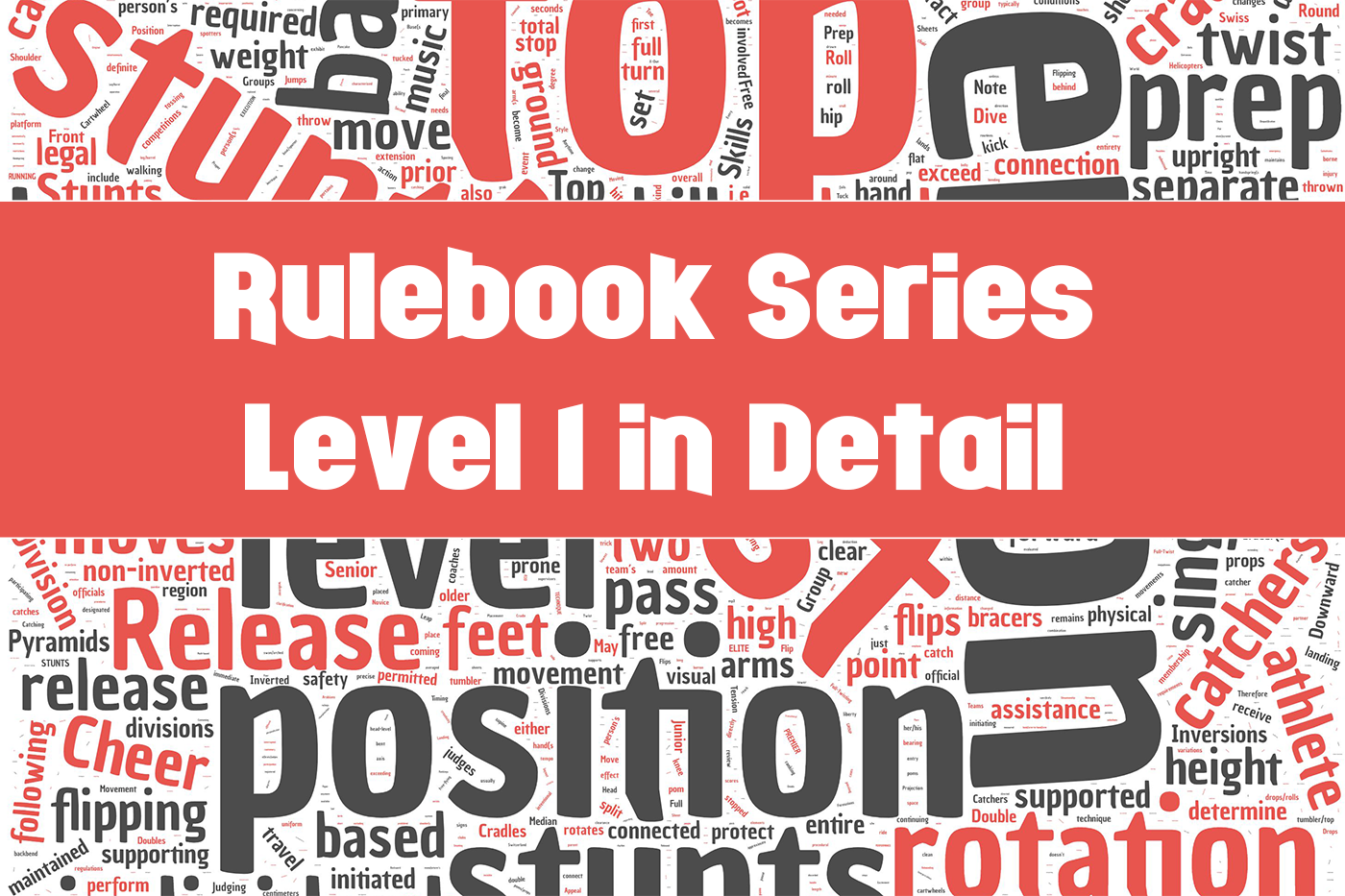 I’ve been requested to cover levels 1 and 2 in the same manner I did 3 and 4, and seeing that I’ve never worked with those levels myself, it’s a great opportunity to learn together, so here goes!

Once again, I won’t be repeating the information I’ve already covered in previous parts of this rulebook series, so read those first if you haven’t yet:

In general, everything is allowed as long as you stay in contact with the floor. So you could do a back walkover with a leg switch or a helicopter cartwheel as well. You could even do them one-handed. The rulebook doesn’t say anything about twisting, so as long as you stay connected to the floor the whole time, I don’t see a reason why you wouldn’t be allowed to do twisting walkovers like this one.

Round-offs and Block Cartwheels are the only exceptions to the “stay on the floor”-rule (dive rolls are not allowed!). You’re not allowed to connect anything to your round-off, except if you want to do a ½ twist jump into a prone cradle-position. That’s allowed. If you want to do tumbling after the round-off, you have to land your rebound/punch first, stand still for half a second, then go on. The momentum you get from the round-off needs to stop.

“Base lying on performance surface on their back with arm(s) extended. A “Floor Stunt” is a waist level stunt.”

That’s a very specific case! You can find an example here at 8:30min. So floor stunting is an exception to the spotter rules, because usually, you wouldn’t need a spotter for waist-level stunts like for example a thigh stand. There is a whole list of clarifications and exceptions to the spotter rule in the rulebook, so make sure you read that and also be sure to know your stunt heights. For example, kneeling on the floor as a base with your arms extended above your head still counts as an extended stunt, even though the flyer is not that high up in the air.

Here’s the definition of a waist-level stunt:

“A stunt in which the lowest connection between the base(s) and the top person is above ground level and below prep level, and/or at least one foot of the top person is below prep level, as determined by the height/positioning of the base. Examples of stunts that are considered waist level: All 4s position based stunts, a nugget-based stunt. A chair and a shoulder sit are considered prep level stunts, based on the point of connection to the base(s), and is not considered a Waist Level stunt.”

Here’s the first part of the definition of the word “Stunt”:

“Any skill in which a top person is supported above the performance surface by one or more persons.”

This is important to keep in mind in level 1, because the restrictions and spotter rules are so tough. If you have a backspot grab a flyer by the waist and lift her off the floor just a tiny bit, that is already a stunt and needs to follow the rules!

Extended stunts are completely forbidden. You can also not pass through the extended position (if you lift up an elevator, it can’t go higher than the bases noses before they put it down). Release moves (if they’re not a dismount) are also completely forbidden; a base must always stay in contact with the flyer. Lastly, inversions are forbidden as well.

Single leg stunts are generally allowed at waist-level. You can use a lot of different grips and positions for waist-level stunts, so here are a few ideas:

As usual, having a base do a backbend and putting a flyer on it is not allowed. All of that you can do without a spotter, because you’re at waist level (except the floor stunt, there you need one). So you can make half of your team into flyers, half of them into bases, and have 12 stunts up at once. You can also add any body position you like. Pretty cool!

If you want to take it up to prep-level, you need a spotter and an additional person for single leg stunts. The additional person has to brace the flyer (hand/arm to hand/arm) and does not count as a spotter. They have to hold before the single-leg stunt starts, so if you do a low-liberty from the ground up they already have to hold the flyer when the dip starts. You can do low-liberty with a single base or two bases, that doesn’t matter, but there has to be spotter (for example the backspot) and a separate bracer. For two-legged stunts, the additional person isn’t needed, only the spotter.

You’re allowed ¼ twist from anywhere to anywhere. That could be the bases walking or the flyer doing the twist herself. The only exceptions are the round-off rebound into a prone cradle (that’s a ½ twist) and what is called a “½ wrap around stunt” (see glossary, it’s a kind of swing-dance-move). The third exception listed in the rulebook just means that you’re allowed to grab the flyer at the waist, lift her up a little and lead her into a ½ turn, then put her down again. We see that often with backs and flyers before the dip for a stunt.

Remember, release move rules only have to be followed when the flyer is actually released by everyone. We’re not allowed to do that at all, but we can still have our flyer in a single-based thigh stand do a stretch-to-stretch “TicToc”, if she puts down her heel-stretch-foot first before lifting up the other one. We wouldn’t even need a backspot for that.

Not allowed in level 1.

Straight cradles from a prep-level stunt are allowed (they need a spotter). So yes, if you do a partner stunt style “hands” with a spotter, you can do a cradle from there as long as the spotter protects the head/shoulder region.

From waist level stunts, you can hop down or or be dropped straight to the floor (no additional tricks) without any assistance. Pop-offs from prep-level stunts are also allowed, but they must be assisted.

As usual, pyramid rules are too specific to just list skills, so I’ll just mention the big things: Single-leg extended stunts are still not allowed, no matter the connection. But you can do two-legged extended stunts if you brace them correctly! No dismounts from above prep level though, so be sure to pull them down before you cradle.

You can also have some fun with fake Tic-Tocks in pyramid. Low-libertys are allowed, and as long as you don’t release them you can make some creative transitions with different body positions. Make sure you fulfill the minimum requirement for your bracer (usually hand/arm connection), but you can also have an additional person hold the upper foot of an Arabesque for example to create a more interesting picture. Your bracers could be in an elevator, shoulder sit, flat back, straddle lift or shoulder stand – try to create some variation with that. (Note: The rulebook doesn’t explain the term “straddle lift”, my guess is that they mean what I call a V-sit, but I’m not sure).

Why I think level 1 is great

This level is virtually risk-free, so it’s very well suited for smaller kids and grown-ups who don’t have a lot of experience with this type of sport. As opposed to all other levels, most stunt variations place the weight of the flyer on the leg of a base, which means that she doesn’t have to put any strain on her spine. This is especially valuable for people with poor posture or weak core muscles. Also, as flyers are almost constantly braced or at least spotted when they’re at prep level, it’s really easy to catch them if they fall.

A flyer can learn all of her basics here: Balancing, getting into a stunt efficiently, body positions on both sides, even Tic-Tocks. The only thing that’s missing is twisting. Bases and spotters can get used to the weight of a flyer on top of them, how to hold and how to balance, and lose their fear of spotting and catching. They can also start building awareness for good posture in stunts without worrying about twisting grips or release moves.

Level 1 tumbling spans a very broad skill set. Less flexible athletes can work on their rolls, handstands, cartwheels and round-offs while they are stretching for the “bendy” skills, and more advanced tumblers can challenge themselves with some super tricky variations that promote body awareness, timing, strength and flexibility all at once.

All in all, this makes level 1 a strong foundation and a great start into the sport for children and less athletic teenagers and grown-ups.