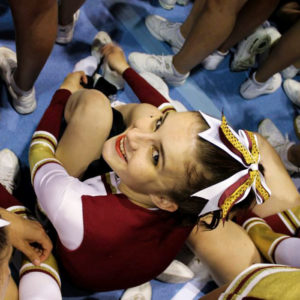 My name is Annika, and I’ve been cheering at Winterthur Warriors Cheerleaders since I was 10 years old. I’m currently 22, so I’ve been active in the sport for quite a while, though I did sit out for a few seasons due to injury. That didn’t stop me from being at the gym however, and I’ve been actively involved in coaching and assisting coaches in all age categories for the last seven years.

How it all started

When I was 10, Kim Possible was my favorite TV show. I also wanted to be world-saving, flipping cheerleader. I then stumbled across a leaflet from the Warriors Cheerleaders, and that was that: I landed where I belonged, and although I haven’t yet saved the world with my flipping, I’m not planning to leave here anytime soon.

On the 4th of November 2013 – the day of my 18th birthday – I walked into juniors practice, where I was assisting the head coach at the time. I expected a hug and a “happy birthday!”. Instead, he turned around when I entered, said “Congratulations, that’s your team now,” and walked out. He did come back later to help me, that part had been for dramatic effect, but nevertheless this moment kicked off my time as a head coach and a long journey of personal development for me and my team.

And now? Why this blog?

I’ve been watching the sport evolving at a breath-taking pace, not only globally but also here in Switzerland. New teams pop up left and right, our routines become more and more spectacular each year, yet still: Whenever I start a new job and my coworkers ask me what I do, it turns out that 99% of the general population either doesn’t know cheerleading at all, or thinks it’s about half-naked girls shaking poms on the sidelines. The other 1% has a friend or relative in cheerleading and thinks the sport is very dangerous.

With this blog, I want to spread the word. I want people to know what exactly cheerleading is, what we do and what we don’t do. I want the sport that I love so much to grow, be known, and receive public recognition. One of my goals is that in a few years, my Juniors won’t have to explain to everyone what exactly they do; people will have heard of it, at least.